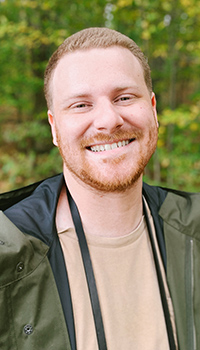 "Wheaton introduced me to my calling, crystallized my belief in that calling, and prepared me to pursue that calling."

Drew Chambers ’17 says that he realized he was called to conduct research long before he was accepted to the Harvard University Graduate School of Education. As a Wheaton College undergraduate, he was invited by professors in both of his majors—secondary education and English—to assist them with research projects.

As he spent long evenings poring over books in the Buswell Library, researching topics for education professor Dr. Mark Jonas and English professor Dr. Kim Sasser, Chambers realized that he’d found the passion that would shape his vocational life.

After graduation, Chambers taught English at a rigorous college prep school in Boston. He spent his days teaching and grading. At night, he researched and wrote about ethics in education, philosophies of learning spaces, and critical theory. “I knew that research and teaching were inexorably intertwined as my vocational calling—the two speak to one another,” he says.

This conviction led him to write his first academic paper, which was published in the prestigious Journal of Philosophy of Education. Chambers presented the paper at the annual meeting of the Philosophy of Education Society of Great Britain, his field’s preeminent conference, held at the University of Oxford. This experience made it clear to Chambers that he was passionate about the student in the context of research—and that he wanted to continue his education.

In 2018, he was accepted into the Harvard Graduate School of Education, where he began studying the ethics of school security in relation to mass shootings. He is publishing a second article on the topic and will continue his research this fall as a Ph.D. student at Columbia University. His wife, Kelly Farley Chambers ’16, will receive her Doctor of Veterinary Medicine from Tufts University later this year.

Chambers says Wheaton was a place that not only nurtured him academically, but also relationally. “Dr. Jonas and I enjoyed countless walks around campus delving into spiritual and personal questions that I had. Dr. Sasser and her husband befriended Kelly and me, and made us feel welcome in their lives,” he says. “Professors at Wheaton were not just my supervisors and professors, but they became, and remain, my mentors and friends.”—Hannah Frankl