Take the Metra Union Pacific West Line train from the Ogilvie Transportation Center, located at Madison St. & Canal St., and get off at the College Avenue stop. Walking one block west will put you at the eastern edge of campus.

Getting to Wheaton from the airport

We do not suggest taking public transportation from either airport, as it takes twice as long and involves multiple steps. If you are not able to drive from the airport, we encourage you to contact a ground transportation company for a more direct route instead.

When contacting the companies below, mention that you are a guest of Wheaton College to qualify for any applicable discounts. Wheaton College does not endorse any specific company.

Driving From O'Hare Airport (about 29 miles)

Cars leaving the airport exit to the east. Keep in the right lane to turn south on I-294. Stay on I-294 south some distance to I-88, also called the East-West Tollway. On I-88 go west toward Aurora several miles to the Naperville Road exit. Proceed north on Naperville Road past the Danada Shopping Center at Butterfield Road, and continue on to Roosevelt Road. Turn right (east) at Roosevelt Road and get into the left lane immediately for a quick left turn at Washington Street. A few blocks north on Washington, you'll cross the Chicago & Northwestern railroad tracks and approach the intersection of Washington and College at the southwest corner of campus.

Driving From Midway Airport (about 35 miles)

Leaving the airport, turn north onto Cicero Avenue and proceed to the I-55 South on-ramp. Take I-55 South to I-355 North. Exit I-355 North at the Roosevelt Road exit and turn left (west). Take Roosevelt Road approximately 3 miles to Washington Street and turn right (north). Continue on Washington Street several blocks, cross the railroad tracks, and approach the stop sign at Washington and College on the southwest corner of campus.

Driving From the South

Approaching Chicago from the southwest on I-55, just beyond Bolingbrook, take I-355 north. Exit at Roosevelt Road to the west. Stay on Roosevelt through Glen Ellyn, past President Street, to Washington Street where you'll turn right. A few blocks north you'll cross the Chicago & Northwestern railroad tracks and approach the corner of Washington and College.

Driving From the North

If you are coming from eastern Wisconsin, take I-94 into Illinois. Proceed south on I-94 and follow the signs for I-294 south, past the O’Hare airport. Continue on I-294 to I-88 west. Take I-88 west to 355 North. Exit 355 at Roosevelt Rd west. Stay on Roosevelt through the town of Glen Ellyn; when you get to Wheaton, go past President Street, to Washington Street where you'll turn right (north) and go approximately 8 blocks to campus.

Driving From the Northwest

Approaching Chicago from the northwest on I-90, turn south on I-355 at Schaumburg. A few miles south, exit west on Roosevelt Road. Stay on Roosevelt through Glen Ellyn, past President Street, to Washington Street where you'll turn right (north) several blocks to campus.

Driving From the West

Approaching Chicago from the west on I-88, exit at Winfield Road and go north for about three miles until you reach Roosevelt Road. Turn right at Roosevelt and travel another three miles into the city of Wheaton. Stay in the left lane and when you pass Naperville Rd. be prepared to turn left (north) at the first street on the left, Washington Street. Campus is a few blocks ahead, just two short blocks across the Chicago & Northwestern railroad tracks.

Driving From the East

East-west I-80/90 becomes I-80/94 as you cross from Indiana into Illinois. Continue on I-80 West to I-355 North. Exit I-355 at Roosevelt Road west (which is a left turn at the bottom of the exit ramp). Stay on Roosevelt through the town of Glen Ellyn; when you get to Wheaton, go past President Street to Washington Street where you'll turn right (north) and go approximately 8 blocks to campus.

Parking is available to visitors in a number of locations, including:

For more information about campus and parking, view this map.

For guests who are lodging at, or attending an event at Harbor House, the College's private guest house, the street address is: 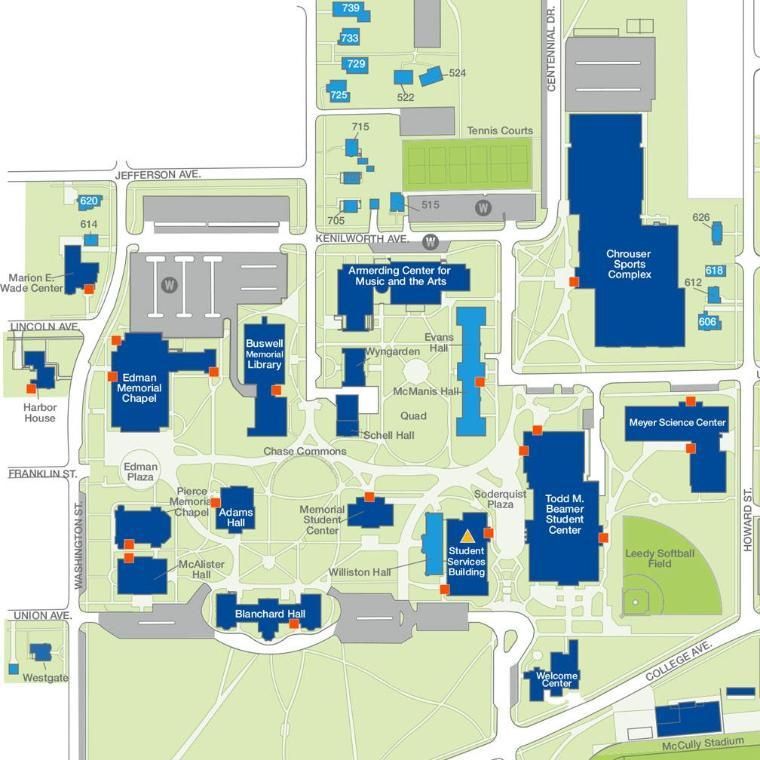