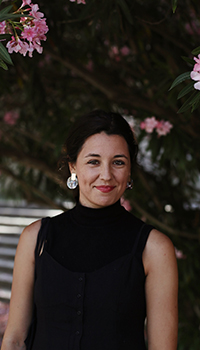 "Wheaton taught me the value, beauty, and necessity of thinking laterally across multiple disciplines and scales, which led me to pursue a career in architecture."

After graduating from Wheaton College, Amanda Iglesias ’14 moved to New Haven, Connecticut where she pursued a Master of Architecture degree at Yale University.

Although her graduate studies didn’t have the explicitly Christ-centered focus that her studio art and graphic design education had at Wheaton, she found herself seeking to find Christ in architecture.

“Wheaton taught me the value, beauty, and necessity of thinking laterally across multiple disciplines and scales, which led me to pursue a career in architecture,” she says. “It is my resolute belief that architecture is vitally important to this world, not simply as a marker of societal ambition, but as a physical conduit of shalom: the redemptive work of God in the physical world.”

Her fascination with church architecture led to her to receive Yale’s Bass Fellowship in Architecture and Urban Studies at Cambridge University. There, she was given a year to explore what she calls the “socio-politically-rich space of the church.” Her research centered on the work of Christopher Wren, including the famous St. Paul’s Cathedral to the perhaps lesser-known but still magnificent London churches, particularly in the chaotic context following London’s 1666 “Great Fire.” Her work in Cambridge caught the notice of leading UK architecture practice ADAM Architecture, which awarded her a 2019 Travel Scholarship to study the ecclesiastical work of Danish architects, Inger and Johannes Exner.

“My research at both Yale and Cambridge fortified not only my faith but its actionable implications within a creative field, which I had begun to formulate while at Wheaton,” she says. “These pursuits will undoubtedly shape my trajectory within the profession of architecture.”

Iglesias now works in New York City as an architectural designer with Robert AM Stern Architects (RAMSA). As she looks to the future, Iglesias aims to become licensed at RAMSA while she works on exciting projects like helping design Georgetown University’s future School of Public Policy.

“A dream of mine would be to design and/or renovate existing ecclesiastical spaces to better reflect the needs of their congregants and broader communities,” she says. “Until then, I like to log my favorite churches via @iglesiasproject!”--Emily Bratcher