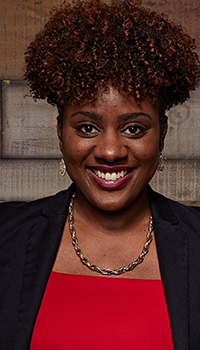 "A liberal arts education disciplines students towards the belief that no subject is truly outside of their grasp."

Carla Wellborn ’12 never liked math. That’s why she avoided taking statistics, one of her general education requirements at Wheaton College, for as long as possible.

“I pushed off the basic math class for as long as I could and barely escaped with a B,” she says.

But just a few years later, as the new director of programs at Winning Futures, a Detroit non-profit that empowers youth through mentoring, workforce prep, life skills, and scholarship programs, Wellborn found herself needing those statistics skills once again.

Her new role included leading program design, implementation, and evaluation—the latter of which would require statistics. “Imagine my horror,” she says.

After the initial shock wore off, Wellborn called on skills and habits she developed at Wheaton College to meet the challenge. “One of those habits is the belief that no subject is truly outside of your grasp,” she says.

So, she got to work studying statistics—seeking teachers and consultants who could help her along the way. “After a year of work, I can now confidently evaluate all of the data my organization collects,” she says.

This confidence in her ability to learn hard things wasn’t the only soft skill she walked away with on graduation day 2012.

“While Wheaton certainly prepared me for the teaching profession, I am most grateful for the uniquely personal leadership preparation I received,” she says.

Wellborn says English professors Dr. Christina Bieber-Lake and Dr. Jeffry Davis pushed her toward her full potential, which led her to complete an M.Ed. in urban education and pedagogy from National Louis University in 2013. She learned humility with Tanya Egler as part of the Gospel Choir, and says the late Rodney Sisco ’84 coached her to dream big for the Kingdom of God.

She credits the impact of these experiences with her passion for changing the lives of the young people in Metro Detroit.

“Because of so many experiences at Wheaton College, I have been compelled throughout my entire career to reach higher and to aim for deeper impact on the young people around me,” Wellborn says. “For this I am eternally grateful.”