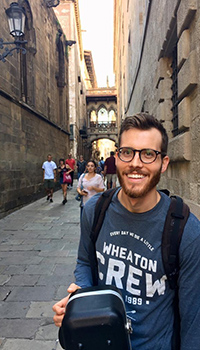 "I was able to witness for Christ and his Kingdom because I was prepared by the education, formation, and foundation that Wheaton gave me."

Isaac Stough ’14, M.A. ’16 was irritated. As he walked to his apartment in Barcelona after working at an evening event with Youth for Christ, he checked his pockets and realized he’d left his keys at home. It was late, and now he was locked out.

But what started as a minor annoyance became an opportunity to share the gospel.

“When I buzzed my neighbors to let me into the lobby, they instead invited me up to their apartment while I waited for my wife to let me in,” Stough says.

During the conversation with his neighbors and their other guests, someone turned to him, and, in a mixture of Spanish and Catalan, said: "Isaac, can we ask you a personal question? Why did you decide to come and live here?"

Stough, who was the only Christian in the group, thought carefully about what he wanted to say. “I told my neighbors that I had come to live in Spain for the purpose of confessing that Jesus lives,” he says. “That threw the conversation into a frenzy of questions, which I tried to answer as well as I could.”

Stough says his time at Wheaton prepared him to share his faith in unexpected situations.

“At Wheaton, I learned how to trust what I believe and to explain it convincingly from different angles,” Stough says. “The challenge to integrate and deepen what I know about God—that was so essential to each of my Wheaton classes—showed me how to trust and have faith. It showed me how to have faith in not only what I know about God, but to trust God himself: the creator of all that can be known.”

“That night, I was able to witness for Christ and his kingdom because I was prepared by the education, formation, and foundation that Wheaton gave me,” he says.

In addition to his work as a missionary with Youth for Christ, Stough and his wife, Jennifer Dordrill Stough ’15, also work at Open Space English Academy, an English language school in Barcelona. In both of his jobs, Stough says, he leans heavily into the lessons learned during his years at Wheaton.

“My time at Wheaton College was essential to my personal, Christian formation,” Stough says. “Through the education I received in the classroom and out of the classroom, I learned how to, in all things, live close to the Spirit of God. Without that, I could never show others how to follow Jesus.”—Emily Bratcher