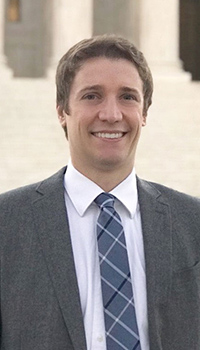 "Clerking at the Supreme Court has been a longtime dream of mine, and the training I received at Wheaton set me on a path to get there."

Trenton Van Oss ’14 is living a dream. The Harvard Law graduate is now clerking for Justice Brett M. Kavanaugh at the U.S. Supreme Court, but he’s quick to point out that Wheaton helped fuel his dream.

“In the classroom, Wheaton taught me to think critically, write clearly, and communicate persuasively,” Van Oss says. “Those are skills I use daily in the process of analyzing the cases that come through the Court.”

In between double-majoring in Spanish and Political Science and jumpstarting Wheaton’s Mock Trial Team, Van Oss also made time to camp out in the Black Hills, study abroad in both Spain and Belize, and intern in Kosovo—experiences that Van Oss says helped broaden his perspective and taught him to think through problems and issues from other points of view.

But he says the relationships he formed at Wheaton have proven just as invaluable as the academics and extracurricular activities.

“The friends I made at Wheaton have been a constant personal and professional support network as, together, we have navigated life after Wheaton,” he says.

That support has been critical for Van Oss as he attended the highly competitive Harvard Law School and traveled around the country for various clerkships and attorney roles in Colorado, Georgia, and finally in the District of Columbia.

The support of his closest friend at Wheaton—Jenn Bredemeier who became his wife in 2018—has been especially invaluable.

“She was the real hero in my hectic job hunt from Denver to D.C. to Atlanta and back,” he says. “There’s absolutely no way I could have pulled it off without her.”

Looking back, Van Oss is grateful for Wheaton’s place in his life.

“Clerking at the Supreme Court has been a longtime dream of mine, and the training I received at Wheaton set me on a path to get there,” Van Oss says. “The skills I learned at Wheaton help me think through and contextualize all of the cases I work on at the Court.”—Emily Bratcher