What memories do you have of your time at the Wade Center?

On my first entering the Wade Center itself, I was hit by a wave of completely unexpected emotion as I walked among furniture for which I had held great affection for years. There was our old hallway wardrobe, hand carved and built from ancient Welsh oak by Jack and Warnie's grandfather, Richard Lewis, and which had graced the family home in Wales before migrating along with the family to Belfast and then to The Kilns in Headington Oxford and finally (so far) to the Wade Center. Jack's upstairs study desk and our dining table were there and still are. And I was filled with a sense of longing for what had been.

It was during my second visit that I began to feel that in a strange way, the Wade Center was welcoming me with same kind of warmth that The Kilns had all those years before. Perhaps it was partly our old furniture, but I also began to achieve at last an uneasy realization that many of the people I was meeting at The Wade, and in Wheaton generally, were Christians in the sense that Jack himself was---and that I was not. A memory that sticks was walking back from the Wade to where I was staying one summer's night (perhaps on my third visit) and suddenly having my eyes afflicted by an occasional flash of light. I blinked my eyes a couple of times before I suddenly realized that for the first since my early childhood, thirty or so years previously, I was seeing again what is to me, one of God's most lovely little phenomena---the air around me was full of fireflies dancing in the summer gloaming.

The welcome that my whole family were given later when we visited en-masse is another wonderful memory.

The stairwell in Buswell Library’s Nicholas Wing (where the Wade was before it had its own building) was a magic entryway to me when going to visit the Wade Center. I still feel the resonant excitement when I walk up it even today. I thought when I climbed those stairs: “I’m almost to that enchanted place where the wardrobe lives!”

I began serving as the Director of the Marion E. Wade Center in 1983. During those years my wife Mary and I traveled to the UK many times to conduct oral history interviews with Owen Barfield and many other British folks who knew C.S. Lewis and the other Wade authors. What a privilege it was to get to know so many good people while we collected memories, letters, books and memorabilia.

All of the Wade authors have stimulated my thinking and spiritual growth. But of the seven writers not one is comparable to C.S. Lewis in changing my life. Discovering the progression of his spiritual formation immeasurably changed my life. Through his writing he has become my teacher and soul physician. I now teach classes and give lectures focused on him and his works. Furthermore, my ministry as an Anglican pastor his been markedly influenced by Lewis. In short, I try to pass to others what Mr. Lewis has given to me. And none of this could have happened without the resources at the Wade Center. Therefore, I owe an enormous debt to the Wade staff, steering committees and donors who served and made donations before, during and after my tenure there. I thank them all. Soli Deo Gloria.

My most abiding memory is a very personal one. In 1997 the Dorothy L. Sayers Society held a convention at Wheaton and for that occasion, the Wade put on a very wide-ranging exhibition of Sayers’s papers and artifacts. I noticed amongst these her personal phone book and asked that it be flipped to the letter D. Amongst the numbers listed was one for "Dr Denholm", who was latterly her personal physician - and my father. It would seem a small thing to others but I thought how splendid it was that the Wade had looked after such minor items.

The Wade Center gives me a constant reminder of my heritage since Marion Wade was my father’s mentor. In the late 1940s Marion Wade invited my father, Ken Hansen, to join in the formation of a business that eventually became ServiceMaster. My father often referred to Marion Wade with deep gratitude and respect. When I walk into the Wade Center, I give thanks to God for Marion Wade. He was a wise and gracious man.

I have often come into the Wade Center with specific questions. As a theologian and biblical scholar by profession, I always find the insights of the Seven to be most helpful. The Reading Room is one of my favorite places for research and writing.

I was delighted to bring two of my grandsons to the Wade Center recently. They were enchanted by the Wardrobe, the desks of Lewis and Tolkien, and pictures in the museum area. Since they have already heard the stories of Narnia, the Hobbit, and the Lord of the Rings, they were entranced by these tangible artifacts.

As important as the literary resources are at the Wade—and for Inklings research, they are second to none—it is the context and people that come first to mind. An English cottage with a Narnian lamppost rather than the great halls of kings and heroes, the Wade is a pleasant and inviting place to read and study. It is a place where I can dig into the literary past as if I am browsing the shelf of an old friend’s study. And the staff—warm, encouraging, and hard as nails on knowledge.

My husband and I owe our meeting to the Wade authors, to the Wade staff, and to our Wade-author-loving friends. Chris Mitchell, then the Wade Center Director, had abruptly told me one morning that “Mike Foster and Adam Schwartz are coming tomorrow. Adam just reviewed a book on Chesterton, the one you’ve just read, and he isn’t married. Why don’t you talk to him?” “Why not?” I thought to myself. Adam, a recent PhD whose dissertation was 25% Chesterton, and I disagreed about the book. But at our wedding in 1998, Mike and Chris were best men.

Our first introduction to The Chronicles of Narnia and The Lord of the Rings was in Dr. Kilby’s course on Myth. Our friendship with Clyde and Martha Kilby grew and drew us to reading and exploring the multiple genres of the seven authors. Sometimes reading the works of these authors is like looking into a mirror and seeing oneself in a new light, sensing God’s presence and insights leading one to prayer and a new response.

Dr. Kilby’s vision for the collection was inspiring. It was incredible to watch him ask God and work very hard to acquire manuscripts with little or no funds. He dreamt far beyond his means and began building a foundation with the first few letters.

Stan and Jeannette Bakke
Friends of the Wade

Most of my memories of the Wade Center combine the threads of friendship and research. Often my trips were made to coincide with those of friends or colleagues who were visiting the Wade from other parts of the country. It was always nice to be able to share immediately a research discovery with a friend working at a nearby table. My memories are kaleidoscopic: of the old location at one end of the library, to the new magnificent Wade Center building; of the helpful staff over the years, as well as the friendships made.

Douglas A. Anderson
Author of The Annotated Hobbit

Some of my fondest memories are of working with researchers and visitors during my time as a Saturday volunteer. Seeing the awe and joy on their faces as they peered into The Wardrobe, or handled a rare book, were priceless experiences.

After the holdings and their accessibility, two other central elements of the Wade are: first, the helpfulness of the staff - always a model of gracious, hospitable, and caring professionalism, from the Director down to the student ‘interning’ on the front desk. And second: the beauty and restfulness of the building, ideally suited to close study and calm deliberation.

I also recall with great fondness the occasion when Walter Hooper was given the Wade’s ‘lifetime achievement award’. When Marjorie Mead read out David Downing’s tribute to Walter, I found myself deeply moved and grateful - not only for Walter’s work and example, nor only for Lewis’s work and example, but also for the fact that this was happening in the Wade itself, which is like the global headquarters, or more aptly, the hearth and home of Inklings scholarship.

The forward-thinking perceptiveness of Clyde Kilby, not to mention the brilliant work of his successors and supporters, is showing its value more and more as time goes by. May God send his blessings on the Wade and, through the Wade, on innumerable people round the world, as richly in the next fifty years as in its first half century of life.

The Wade center has a very special atmosphere. I was always impressed by the disarming hospitality and friendliness of all those who work there, who always did much more than I expected to make me feel welcome and to help me with particular needs and questions. 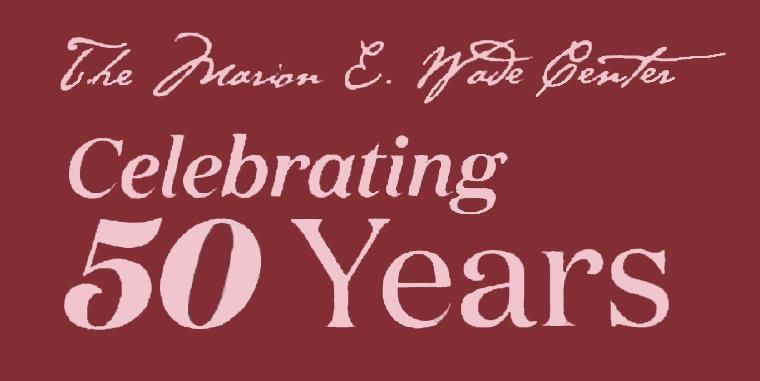