“All joy reminds. It is never a possession, always a desire for something longer ago or further away or still 'about to be.'” 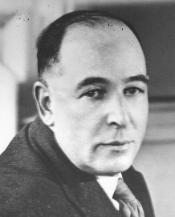 A scholar and author, Clive Staples Lewis left his mark on the realms of literary criticism, Christian apologetics, and fantasy stories. While children know him best for the seven Chronicles of Narnia, his religious writings such as Mere Christianity and The Screwtape Letters remain popular today, and his work on Milton, A Preface to Paradise Lost, is considered a standard critical work.

Born in Belfast, in the north of Ireland, Lewis was educated and lived most of his life in England. He served and was wounded in the trenches of World War I France, after which he completed his studies at Oxford University. In 1925, he was elected to a Fellowship in English Language and Literature at Magdalen College, Oxford, where he taught for thirty years. Beginning in the 1930s, Lewis and some friends often gathered informally to discuss their writings and other topics. This group known as "The Inklings" continued meeting regularly until the 1950s, and included such members as J.R.R. Tolkien, Owen Barfield, and Charles Williams. Lewis's popular success began in the 1940s with his BBC radio broadcasts (which later were compiled in written format as Mere Christianity) and publication of The Screwtape Letters. His autobiography, Surprised by Joy, is an engaging description of his journey to faith. In 1955, Lewis left Oxford for Magdalene College, Cambridge, where he was appointed Professor of Medieval and Renaissance Literature, a position he held for the rest of his life. It was also during the 1950s, that Lewis met and married Joy Davidman Gresham, an American writer, whose influence can be seen in Lewis's novel, Till We Have Faces as well as his study on the nature of love, The Four Loves. Joy's battle with cancer and her subsequent death were the subject of two different films both titled, Shadowlands. Lewis's own struggle with her loss is movingly captured in his book, A Grief Observed. After Joy's death in 1960, Lewis's health gradually declined. He died after an illness of several months in his home outside Oxford, on November 22, 1963, the same day President Kennedy was assassinated. Lewis was just a few days short of his 65th birthday.

Raised in a Christian home, Lewis abandoned his faith as a young man, but returned to God as an adult, acknowledging the deity of Christ after a long conversation with several of the Inklings on the nature of myth and truth. "I have just passed on from believing in God to definitely believing in Christ…" he wrote to a friend. "My long night talk with [Hugo] Dyson and Tolkien had a great deal to do with it." A member of the Anglican Church, Lewis's devout and vigorously reasoned faith is the subject of many of his works, and his impact on Christian thought during his life and after has been of tremendous significance.

View the Additional Resources page for more information about C.S. Lewis and his works.