“The act of defending any of the cardinal virtues has today all the exhilaration of a vice.” 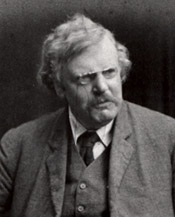 Gilbert Keith Chesterton, prolific journalist and author, was well known for his apologetics, biographies, detective fiction, literary, social, and political commentary, and modern history. Possessing a keen wit, a comic genius delighting in paradox, and a gift for religious argument, he published nearly 100 books and over 4,000 newspaper columns and essays.

While attending art school in London in the mid-1890s when he was about twenty, Chesterton realized his artistic limitations and determined to pursue journalism. A few years later he was writing columns regularly for several newspapers, including the Daily News and the Illustrated London News, and by 1902 was widely recognized for his abilities as a political and social critic, and as a writer in general. During the first decade of the 20th century Chesterton's voluminous written output only increased, and included his first novel, The Napoleon of Notting Hill, and his classic work on the basics of Christian belief, Orthodoxy. Chesterton also met George Bernard Shaw and Hillaire Belloc during this period, men with whom he worked and debated for most of the rest of his life. He took over editorship of the The New Witness in the 1910s, and renamed it G.K.'s Weekly, using it as another vehicle for his articles and essays, and to introduce his Father Brown detective stories. Chesterton and his wife, Frances, visited the U.S. twice between 1920 and 1930, both times stopping in Chicago. His book, What I Saw in America (1922) contains his thoughts about his 1921 trip. Chesterton continued writing essays and articles, among them "The Everlasting Man" and "The Thing: Why I Am a Catholic." The former work helped convince C.S. Lewis of the sensibleness of Christianity.

A large man in later life, Chesterton was often seen on London's streets walking to and from his office, sporting a cape, swordstick, crumpled hat, and tiny glasses, talking with friends and colleagues. In the early 1930s, Chesterton began a series of popular BBC radio broadcasts addressing a variety of issues. Chesterton died in 1936 at age 62.

At an early age Chesterton ceased to accept the existence of a higher being, but later came to believe in a personal God and in the Christian faith. He eventually became a Roman Catholic, finding there the spiritual discipline and responsibility he believed were needed in an increasingly decadent world. In spite of his strong ties to the Catholic Church, Chesterton's writings spanned denominational lines with such apologetic works as Orthodoxy and The Everlasting Man--writings that dealt with the core tenets of the Christian faith.

View the Additional Resources page for more information about G.K. Chesterton and his works.