“Our longing desires can no more exhaust the fullness of the treasures of the Godhead, than our imagination can touch their measure.” 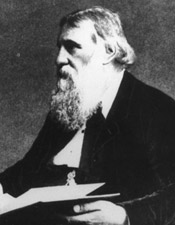 George MacDonald was a popular Victorian author, now best known for his children's stories, such as At the Back of the North Wind and The Princess and Curdie, and his fantasies for adults, Phantastes and Lilith. One of only a few writers of his time to write symbolic fiction, his romantic vision of spiritual realities has greatly influenced such writers as W.H. Auden, G.K. Chesterton and C.S. Lewis.

A native of Scotland, MacDonald attended the University of Aberdeen, but although receiving a master's degree in chemistry and physics in 1845, was uncertain about what to do with his life. Desiring to bring others to the Christian faith, and having a gift of preaching, he attended Highbury College, London, graduating in 1850 with a divinity degree. The following year he assumed the pastorate of a Congregationalist Church in Arundel, near the southern coast of England, and also married Louisa Powell, with whom he would eventually have eleven children. Within two years his congregation asked him to leave for theological reasons, particularly his insistence on the duty of obedience to the principles of Christian living. In poor health, struggling to support his growing family, and searching for a means to communicate his beliefs, MacDonald turned to writing. In 1858 his long poem "Within and Without" was published and well received, helping to establish MacDonald's reputation. Three years later Phantastes was published to literary acclaim but little public enthusiasm. MacDonald took up lecturing to support his family and about 1860 became Professor of English Literature at Bedford College, London, a post he held for seven years. In 1863 his novel, David Elginbrod, was published and proved very popular. For the next forty years MacDonald lectured and wrote realistic novels, fantasy, children's stories, and poetry, enjoying popular and financial success. MacDonald produced some of his best works during the last 15 years of his life, including There and Back and Lilith. MacDonald died in 1905 at the age of 80.

MacDonald took issue with the strict Calvinism of his upbringing and the emphasis on theological systems to the neglect of the Gospel of God's love. God the Father's love for humanity, as exemplified in Christ, was an overriding principle for MacDonald, and imagination and symbolism were his keys to knowing that love. A common theme of Macdonald's is a journey that springs from the main character's longing for or wanting to know more about some unknown, a search which brings one ever closer to God.

Learn more about MacDonald's life with the George MacDonald Timeline.

View the Additional Resources page for more information about George MacDonald and his works.