“...faith is not primarily a ‘comfort,’ but a truth about ourselves. ... Only when we know what we truly believe can we decide whether it is ‘comforting.’” 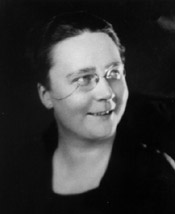 Considered one of the foremost modern detective writers and perhaps best known for her Lord Peter Wimsey novels, Dorothy Leigh Sayers was also an accomplished and popular playwright, religious commentator, and scholar whose translation of Dante's The Divine Comedy is considered unmatched in quality and readability.

Sayers attended Somerville College, Oxford, graduating in 1915 with first class honors in modern languages. Not caring for the academic life, she held a variety of jobs in publishing, advertising, and teaching. Frustrated with several relationships, worried about how to support herself, and unsure of her abilities, she nonetheless began writing detective fiction, and in 1923 her first Lord Peter Wimsey novel, Whose Body, was published. A few years later Sayers met and married Arthur Fleming, a journalist 12 years her senior, and over the next decade or so Sayers wrote 14 Lord Peter Wimsey novels and short stories, enjoying popular and financial success, her husband often acting as assistant and unofficial press agent. Sayers turned to play writing in the mid-1930s, a medium which highlighted her poetic skill and dramatic abilities with Christian themes. Although not her first play, The Zeal of Thy House, produced in 1937, was her first such commercial and critical success. Sayers' most well-known play, The Man Born to be King, broadcast on the BBC in 1941, was very popular but caused a stir for its Christ who spoke modern English. Sayers was sought out as a religious commentator as well, and so also in 1941 The Mind of the Maker was published. Sayers continued writing plays and other works throughout the 1940s and into the 1950s, and began translating Dante's The Divine Comedy, an interest of hers for some years as a result of reading Charles Williams' The Figure of Beatrice. Her translations of Dante were to be her greatest accomplishment, though she died in 1957 at age 64 before completing the last of its three volumes.

An Anglican all her life, Sayers also recognized that "I am quite without the thing known as 'inner light' or 'spiritual experience.'" Instead, she possessed what she termed a "passionate intellect," and it was this intellect and her creativity which enabled her to write as she did. Yet, for all her intellect, "Christianity is as plain and common as bread. The simplest person or the youngest child can be a Christian, by faith and baptism."

View the Additional Resources page for more information about Dorothy L. Sayers and her works.