George MacDonald in the Age of Miracles 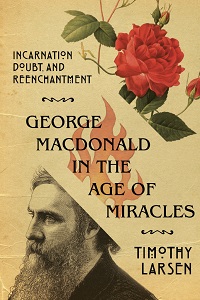 Now available: George MacDonald in the Age of Miracles, by Timothy Larsen, the Carolyn and Fred McManis Professor of Christian Thought, Wheaton College.

The second in the Hansen Lectureship series published by InterVarsity Press Academic, this volume considers the legacy of George MacDonald, the Victorian Scottish author and minister who is best known for his pioneering fantasy literature, which influenced authors such as C.S. Lewis, J.R.R. Tolkien, G.K. Chesterton, and Madeleine L'Engle. Larsen explores how, throughout his life and writings, MacDonald sought to counteract skepticism, unbelief, naturalism, and materialism, and to herald instead the reality of the miraculous, the supernatural, the wondrous, and the realm of the spirit.

Praise for George MacDonald in the Age of Miracles:

"Rarely, if ever, does a theologian grasp the essentials of luminaries such as C.S. Lewis, J.R.R. Tolkien, George MacDonald, G.K. Chesterton, and Madeleine L'Engle. But here, in this exquisitely argued, beautifully crafted, and elegantly written thesis, Timothy Larsen offers a beguiling meditation on incarnation, doubt, and reenchantment. With his careful and nuanced focus on George MacDonald, Timothy Larsen has produced a poised, sumptuous, and sublime theological essay—worthy, indeed, of Lewis, Chesterton, Tolkien, L'Engle, and MacDonald. This is Christian apologetics at its best and from one of the finest public intellectuals writing in our time."

The Wade Center is grateful for this partnership with IVP Academic, and the many ways that this book series broadens the scope of the conversation about these authors and their work. Copies of George MacDonald in the Age of Miracles are available for purchase at the Wade Center, and online from IVP Academic.