Charles Williams, The Forgiveness of Sins (1942) 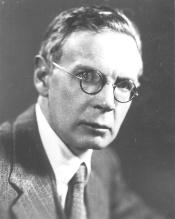 An editor at Oxford University Press and a popular lecturer on English Literature, Charles Walter Stansby Williams published nearly 40 books, including poetry, plays, novels, literary criticism, biographies, and theological works. He is best known for his "spiritual thrillers," which powerfully portray good and evil, and for The Figure of Beatrice, a study of Dante's Divine Comedy.

Williams began his formal schooling in St. Albans near London and won a scholarship to University College, London, in 1901. Two years later left without taking a degree, unable to afford to continue his education. For several years he worked as a bookroom clerk, then in 1908 took a job with Oxford University Press as a proofreader. Williams had written poetry since adolescence and in 1912 saw his first work published, the sonnet sequence The Silver Stair. He married Florence Conway in 1917, had a son in 1922, and by 1924, due to his extensive knowledge of English literature, was working as an editor for the Press and giving regular lectures on English literature for adult education classes in London. In the late 1920s he turned his attention to other literary forms, publishing, for example, seven novels between the years 1931 and 1945, of which Descent into Hell (1937) is perhaps the most well-known. Throughout this period, he also continued to write poetry, most notably Taliessin through Logres (1938), the first volume of his Arthurian poetry cycle. In the 1940s he found the academic recognition he had long sought when after giving a series of well-received lectures at Oxford University he was awarded an Honorary Master of Arts in 1943. The same year his scholarly study of Dante and romantic theology, The Figure of Beatrice, was published, a work which sparked Dorothy L. Sayers' interest in Dante. The following year, his novel, All Hallows' Eve, and the second volume of his Taliessin cycle, Region of the Summer Stars, were published, and he began work on The Figure of Arthur, but died on May 15, 1945 before completing it. He was 59 years old.

A member of the Church of England, Williams also knew the value of rationalism, was interested in the supernatural, and had a detailed knowledge of the occult. Yet, as demonstrated in his novels, he clearly understood that such practices were evil and selfish attempts at individual power. Central to his thinking were the theological concepts of co-inherence, the "way of affirmation," and substitution, the death and resurrection of Christ, God's perfect substitution for the sins of humankind, being the center of his life.

View the Additional Resources page for more information about Charles Williams and his works.