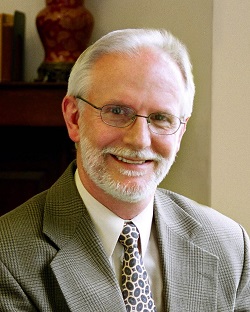 Prior to coming to Wheaton College he served as a missionary and pastor. Mitchell received his M.A. from Wheaton College, and a Ph.D. from the University of St. Andrews, Scotland, where his concentration was Historical Theology with a particular focus on Jonathan Edwards.

He has also written articles for Who's Who in Christian History (Tyndale), Dictionary of Scottish Church History and Theology (T&T Clark), the Evangelical Dictionary of Theology, revised edition (Baker), and the New Dictionary of National Biography (Oxford University Press).

He retired from the Wade Center in June 2013 and moved with his wife Julie to Southern California where he taught at the Torrey Honors Institute of Biola University. He passed away suddenly and unexpectedly on July 10, 2014.

Resources in Memory of Chris

The Undiscovered C.S. Lewis: A Collection of Essays by Celebrated Lewis Scholars in Memory of Chris Mitchell (Winged Lion Press, 2021) contains essays which include new discoveries and fresh insights into C.S. Lewis’s life and work, and also map out a trajectory for future studies. Contributors include Douglas Gresham, Diana Pavlac Glyer, Mark A. Noll, Walter Hooper, Michael Ward, and others. The book is available for sale at the Wade Center. Contact the Wade for more details.