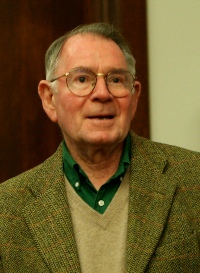 The name of Walter Hooper is well known to anyone who has read and enjoyed the many posthumous publications of C.S. Lewis. With more than 30 edited Lewis volumes to his credit, Hooper has also made significant contributions to Lewis scholarship through his co-authored biography of C.S. Lewis, as well as his comprehensive reference work, C.S. Lewis: A Complete Guide to His Life and Works. Hooper’s most recently completed work is the three-volume edition of the Collected Letters of Lewis.

Born on March 27, 1931, in the small town of Reidsville, North Carolina, Walter McGehee Hooper earned a B.A. in English and an M.A. in Education from the University of North Carolina at Chapel Hill. He served in the U.S. Army for two years between these degrees, and it was during this time that he began to read the writings of Lewis in earnest. Because it was difficult for Hooper to obtain copies of Lewis’s books, his initial approach to reading Lewis’s writings was of necessity very eclectic. Hooper had first read Lewis’s introduction to J.B. Phillips’s translation of Letters to Young Churches several years before, and he continued on with whatever titles he could find. This led him to read Miracles, The Screwtape Letters, Arthurian Torso, The English Literature of the Sixteenth Century, and The Lion, the Witch and the Wardrobe. This unstructured approach to Lewis had a significant benefit: Hooper came to discern a unified authorial voice.

In June 1963, Hooper traveled to England to study at Exeter College’s summer session. While there, he met C.S. Lewis in person: their first conversation continuing on in various meetings over several weeks. He also began helping Lewis informally with his correspondence and other related tasks. In time, Lewis asked Hooper if he would consider staying on in England and serving as his secretary. Sadly, during Hooper’s return home to the U.S. to finish a teaching assignment and prepare for a more permanent move, C.S. Lewis died on November 22. Walter Hooper returned to England in January 1964, and began to assist with matters related to C.S. Lewis’s literary estate.

Since then, Hooper edited numerous volumes of Lewis’s writings, as well as published three books of his own on Lewis and his writings: the two titles mentioned above and also the very helpful Past Watchful Dragons (on The Chronicles of Narnia). As a result of these many years of his faithful literary stewardship, there is not a single reader of C.S. Lewis’s writings who is not deeply indebted to Walter Hooper for his numerous, significant and irreplaceable contributions to Lewis studies. Hooper was awarded the Clyde S. Kilby Lifetime Achievement Award by the Marion E. Wade Center on October 21, 2009.

Walter passed away on December 7, 2020, in Oxford, England. Though he is deeply missed by his colleagues and friends, his significant contributions to Lewis scholarship endure. For that, we remain eternally grateful. 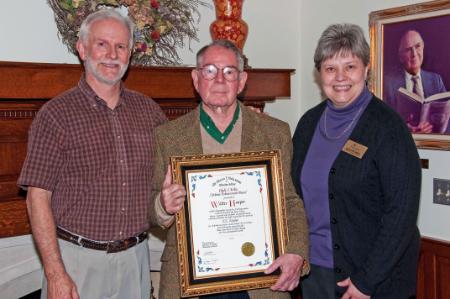 Photo above: Hooper with Chris Mitchell and Marjorie Mead
Social Media
Contact Us