The Wheaton College Billy Graham Center Archives is home to a treasured collection of papers and journals, including the recently acquired love letters of Jim and Elisabeth Howard Elliot. 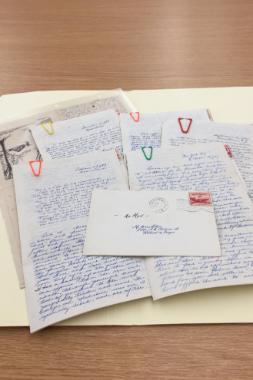 Marginalia is what drew Katherine Graber to a career as an archivist.

Back in 2011, Graber, who is now the Director of the Wheaton College Billy Graham Center Archives, was an undergraduate student transcribing some correspondence between British philosopher Owen Barfield and British writer and theologian C.S. Lewis for the Marion E. Wade Center.

Although the letters had already been published, the notes and drawings inked in the margins hadn’t. Graber’s job was to transcribe the notes Lewis left for Barfield in his letters.

“It’s the kind of thing that really fires up your imagination,” she said. “C.S. Lewis would get a letter from Owen Barfield and he would return it to him and would comment on his letter, sometimes drawing pictures and adding exclamation points.”

In other words, a great theological-philosophical debate was occurring in the margins, but it was something you could only experience firsthand.

“There’s the published version that you could go to any library to get and read and think you know the full story, but then you’re missing everything in the margins,” Graber said. “They’re somewhere in a box on a shelf in the archives, and they are there for people to see them, and it really completes the picture of these people.”

That experience clinched it for Graber. She wanted to become an archivist—not only to preserve treasures like these, but to also make them accessible to others.

While finishing a master’s degree in Library and Information Science from the University of Illinois, Graber was hired as the Public Services Archivist for the Wheaton College Billy Graham Center. This past year, during COVID-19, she was promoted as its director.

One of the unique aspects of the WCBGC Archives, which stores materials related to nondenominational, Protestant, North American evangelism and missions’ activities, is that the majority of their archival material is donated. For instance, WCBGC has collected materials related to the life and ministry of Jim and Elisabeth Howard Elliot since 1982—and they continue to receive donations.

In 2019, the Elliots' daughter Valerie Shepard donated her parents’ love letters written over the course of their courtship, engagement and marriage. These were added to a substantial collection the WCBGC already owns with gems like Jim’s journal with the now-famous lines: “He is no fool who gives what he cannot keep to gain what he cannot lose.”

The Luis Palau Evangelistic Association donated some of the correspondence, newspaper clippings, reports, and other papers from the global evangelist’s work from all over the world, including the 1996 evangelistic outreach to the city of Chicago. Palau, who was often referred to as “the Billy Graham of Latin America,” died in early March 2021 at the age 86.

The Archives is becoming also a storehouse for records that document missions from all around the globe. In fact, Graber said, that the archival material from the organization Africa Inland Mission is the all-time most-used collection in the WCBGC Archives.

Since the start of the pandemic, the WCBGC Archives has closed its Reading Room to the public, but Graber can’t wait to welcome researchers back in-person when it’s safe.

Learn more about the WCBGC Archives >