A strike of lighting sparked an idea that led to a major scientific discovery. 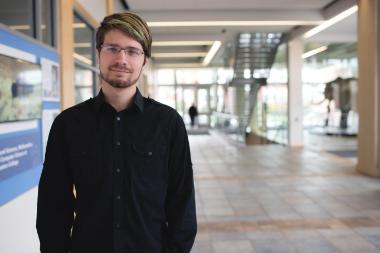 This week, Benjamin Hess ’19, now a graduate student at Yale, published groundbreaking research in the journal Nature Communications, positing that lightning strikes could have provided the phosphorous necessary for life on earth rather than meteorites as previously hypothesized. His study has grabbed media attention from major outlets including NPR, Smithsonian Magazine, and CNN.

And it all started while he was studying geology at Wheaton. It was a single strike of lightning five years ago that sparked Hess’ curiosity to investigate further.

“This research has been three years of being amazed at the provision of God,” Hess said. 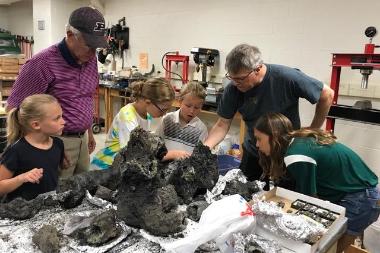 It all started back in May of 2016, when Wheaton College Physics and Astronomy Professor Dr. A.J. Poelarends got a call from Glen Ellyn, Illinois resident Janet Tuscher, about a possible meteorite that had dropped in her yard.

It was clear to Wheaton Geology Professor Dr. Stephen Moshier that the fragile glassy material in the Tuscher’s yard was not a meteorite, but fulgurite, a mineral formed when lightning strikes sand, soil or rock. According to weather records, the strike probably occurred during a storm during a week in January 2016 when the family was away from the property.

Moshier spent the next couple of days excavating this rare mineral and brought it back to the College where it eventually caught the interest of then junior geology student Benjamin Hess.

“When Benjamin started working on the project, we had no idea it would go this far,” Moshier said. “So little is really known about fulgurite, because they are rare, and clay fulgurites like this are even rarer.”

Hess wanted to learn more about the fulgurite’s composition—a research question that led him to apply for and receive the prestigious Goldwater Scholarship. This scholarship then enabled him to spend the fall semester of his senior year studying the fulgurite at the University of Leeds. With the university’s specialized laboratory equipment, Hess discovered that the fulgurite excavated in Illinois contained schreibersite, another rare mineral that is also found in meteorites and contains phosphorous.

In a research article in Nature Communications titled “Lightning strikes as a major facilitator of prebiotic phosphorous reduction on earth,” Hess and coauthors Sandra Piazolo and Jason Harvey, both from the University of Leeds, propose that minerals produced at the earth’s surface by lighting could’ve provided phosphorous that was necessary for organic molecules early in its history.

“This study is significant in that it provides clues about the origin of one of the building blocks of life on earth,” Poelarends said. Previously, the prevailing hypothesis was that meteorites had provided the necessary phosphorous.

As Hess considered the past three years of research, he said he has been overwhelmed by God’s provision.

“While I had ambitions for what a study of this fulgurite study might lead to, I never had the means,” Hess said. “I was always prepared for it to hit a wall and be unsuccessful. But every step of the way, God cleared the path for me. Many times, I remember thinking ‘this won’t work’ or ‘this will amount to nothing’ or ‘I don’t have access to that; this is the end of the project.’ And then, miraculously, I would have access to multi-million-dollar lab equipment for free. I have no doubt that God has called me to be an Earth scientist, that God loves careful study of His creation, and that He has many future plans for me as a scientist.”

Benjamin Hess while a student at Wheaton. | The Tuscher family examining the fulgurites they donated to the College.