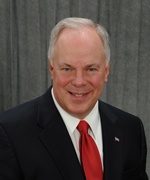 James T. Spear (Jim) is the retired executive vice president and chief financial officer of Cadence Health, where he served from 2006 to 2012. Prior to that Mr. Spear served as vice president finance at Keebler Foods and also operated an independent advisory and consulting business.

Since his retirement, Mr. Spear has periodically engaged in various consulting and advisory activities. Mr. Spear also currently serves on several boards of directors of including Flowers Foods, Inc., a NYSE manufacturer and marketer of bread and snack products, The Trust Company of Illinois, and The Trinity Forum. Mr. Spear served on the Board of Directors of Cadence Health and its predecessor companies for over 17 years.

In addition to his board and advisory work, Mr. Spear is an adjunct professor at Wheaton College teaching business ethics. Since 2013, the National Association of Corporate Directors has designated Mr. Spear as a Board Leadership Fellow, their highest recognition of expertise in corporate governance.

In his tenure at Cadence Health, Mr. Spear was part of the Executive team that led Cadence Health to be one of America’s Top 100 Hospitals for five consecutive years and the most profitable health system in the country.

Prior to joining Cadence Health, Mr. Spear had his own business specializing in advising boards of directors on strategic, financial and governance matters; was the co-Chief Executive Officer and Chief Financial Officer at Bake-Line Group, LLC; the largest private label cookie manufacturer in the country; and before that, the Vice President Finance at Keebler Foods. While at Keebler, Mr. Spear was part of the Executive team that bought the Company, led a significant turn-around, made four other acquisitions, took the company public, and operated it as a highly successful public company until its acquisition by Kellogg Company. He began his career with Price Waterhouse, where he served in the Chicago office in audit and information technology consulting, and the Chairman’s Office of the firm’s world headquarters in London.

Mr. Spear graduated from Miami University of Ohio and has an MBA from Indiana University. He is both a Certified Public Accountant and a Certified Management Accountant. Jim and his wife, Elaine, have three adult children and reside in Naperville, Illinois.