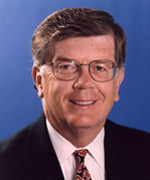 E. Floyd Kvamme is a Partner Emeritus at Kleiner Perkins Caufield & Byers, a high-technology venture capital firm that invests in and nurtures cutting-edge startups.  He has been responsible for the development of high technology companies in the areas of semiconductors, communications products and displays, magnetic storage, personal computer and large system software, and solar energy components.

From 2001 to 2008, Mr. Kvamme served as Co-Chairman of President Bush’s President’s Council of Advisors on Science and Technology (PCAST).  In this capacity, he counseled the President on technology issues ranging from homeland defense to federal research-and-development spending to energy generation. George W. Bush said of Kvamme, “He is an entrepreneur; he is a risk-taker, he understands risk and reward. He knows the players, the people that can bring good, sound advice to this administration.”

He previously served as Chairman of Empower America, a Washington based issue advocacy organization and on the boards of the Markkula Center for Applied Ethics at Santa Clara University, the National Venture Capital Association (NVCA) and on the Executive Committee of The Technology Network (TechNet).  Kvamme also serves as an elder in his church and on the board of Joni and Friends, a ministry to the Special Needs community.

Kvamme helped found National Semiconductor in 1967, serving as general manager of Semiconductor Operations and building it into a billion-dollar company.  In 1982, he became executive vice president of Sales and Marketing for Apple Computer. While at Apple, his responsibilities included worldwide sales, marketing, distribution and support. His efforts were instrumental in the introduction of the Macintosh in one of the most successful technology product introductions.

Kvamme holds two degrees in Engineering; a BS in Electrical Engineering from the University of California at Berkeley (1959) and an MSE specializing in Semiconductor Electronics from Syracuse University (1962).  He lived in California with his wife of 59 years, the late Jean Kvamme. The Kvammes had their first date at the 1958 Billy Graham crusade in San Francisco.

Jean was born in Sacramento, CA and lived in San Francisco, from the time she was eight years old.  She attended public schools graduating from Mission High School in 1954.  She worked the 4/4 plan at Metropolitan Life Insurance Company (present location of the San Francisco Ritz Carlton Hotel) her senior year of high school to help pay for her dental bills.  After graduating high school, she worked at various executive assistant positions helping to support her mother and brother.

She and Floyd met at a San Francisco church when they were 12 years old and married in June,1959, two weeks after Floyd graduated from UC Berkeley.  While Floyd was pursuing his career, Jean was an active stay-at-home mom.  She was very involved in their son's schools receiving many awards for her service, was a Saratoga Heritage Commissioner and served on various cultural boards.  After her youngest son started UC Berkeley, Jean started a home-based computer service business in the Meeting Planning field.  It grew steadily the ten years she owned it from 1987-1997.

In 1997 Jean and Floyd purchased a ranch in Felton, CA to follow her dream of riding and connecting with horses.  She had 5 Peruvian Paso horses.  She has hosted many clinics for riders and trainers teaching the skills of natural horsemanship that utilize trust and partnership between riders and their horses rather than fear.  In 2015, Jean established Lichen Oaks Adaptive Riding Center (LOARC) providing therapeutic riding for special needs children and adults serving as its Executive Director.

Jean's first love were her grandchildren ages, 1 1/2 through 19.  She cared for the school aged ones at least one day per week in their Saratoga home.  She loved surprising them at her home with great activities and fun things to do.

She was President/Director of The Jean and E. Floyd Kvamme Foundation which funds Christian organizations, as well as cultural, educational and medical. Jean passed away in 2020, leaving a rich Christian legacy for her family and many charitable organizations.