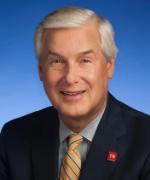 Greg Adams served as the first Chief Operating Officer for the State of Tennessee until February of 2019.  He joined the governor’s senior team in July of 2013 after working for IBM for 37 years.

Adams was a member of the company’s senior leadership team, most recently as a managing director in the financial services sector. Throughout his time at IBM, he held positions in sales, marketing, operations, reengineering & quality, and general management.

Early in his career, he spent two years in Knoxville as branch manager of IBM’s East Tennessee operations and then moved to Nashville where he was regional manager of the Mid-South region. After that, he served as managing director of operations and board member for IBM Japan in Tokyo.

In 1994, he moved to New York where he held a variety of senior executive positions related to IBM transformation initiatives. His 11 years in New York included roles from general manager of process industries for IBM North America to vice president of small and medium businesses for Canada, United States and Latin America.

In the governor’s ongoing effort to make Tennessee the best-managed state in the nation, Adam’s role was to work with state departments to ensure they were operating in the most efficient way possible.  Since his retirement from the State he is engaged in various consulting and advisory activities.

Adams earned a Bachelor of Science in Engineering degree from Princeton University in 1976 and a master’s in science and management from M.I.T. in 1989. He has been married to his wife, Jeannine, for 43 years and has three married children and nine grandchildren. His son Brian, and daughter-in-law Emily, are Wheaton class of ’01.