The Healthcare Labyrinth: Where Do We Go From Here? 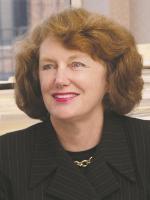 Sally C. Pipes is president and chief executive officer of the Pacific Research Institute, a San Francisco-based think tank founded in 1979. She has held that position since 1991. In 2015, she was named the Thomas W. Smith Fellow in Health Care Policy at PRI.  Sally addresses national and international audiences on health care issues.

Her op-eds have been published in The Wall Street Journal, Washington Post, USA Today, Financial Times of London, The Hill, RealClearPolitics, New York Times, Los Angeles Times, Fortune, San Francisco Chronicle, Sacramento Bee, U.S. News and World Report, and the Boston Globe.  Sally has been invited to testify before the U.S. Congress, most recently in front of the U.S. Senate Committee on Health, Education, Labor and Pensions (HELP).

She is the author of The Way Out of Obamacare, The Cure for Obamacare, The Pipes Plan, The Truth About Obamacare, The Top Ten Myths of American Health Care: A Citizen’s Guide, and Miracle Cure: How to Solve America’s Health Care Crisis and Why Canada Isn’t the Answer. The False Promise of Single Payer Health Care will be published by Encounter Books, Spring 2018.