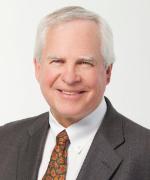 Bill Scholl is the president and CEO of First Security Bancorp in Arkansas and served a six-year term on the board of the Federal Reserve Bank of St. Louis, Little Rock branch.

Bill Scholl’s role as an FPE Fellow included visits to classes, one-on-one mentoring and roundtable discussions.  Scholl also came to the Center showing of Money for Nothing: Inside the Federal Reserve and allowed for deeper insights by taking audience questions after the film.  Scholl was also interviewed on the Federal Reserve for a WETN series known as InsideWheaton.