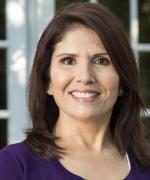 Evelyn Sanguinetti is a wife, working mother of three, and an attorney by trade. Sanguinetti was born in Hialeah, a neighborhood outside of Miami, Florida, to teenage parents – her mother a Cuban refugee, and her father an Ecuadorian immigrant. Growing up in extreme poverty, Sanguinetti relied on government assistance for food and housing. Her first language was Spanish. Although Sanguinetti struggled in school, her first break came when she earned a place in the prestigious New World School of the Arts, a magnet school for the arts in Miami. She then went on to attend Florida International University.

Following graduation, Sanguinetti moved to Chicago to attend The John Marshall Law School (JMLS) where she developed an understanding and passion for the law and for Illinois. While in law school, Sanguinetti joined the JMLS Fair Housing Legal Clinic. She served as President of the Hispanic Student Association and the Fair Housing Association. Through her work at the Fair Housing Legal Clinic, she was able to practice law pursuant to Illinois Supreme Court Rule 711, and represented victims of housing discrimination. While a student, she successfully handled the first ever case at the Chicago Commission on Human Relations that established a precedent for discrimination based on source of income. McCutchen v. Robinson, CCHR No. 95-I-1-84. She soon joined Illinois Attorney General Jim Ryan’s office as an Assistant Attorney General where she fought to protect the people of the State of Illinois. Sanguinetti subsequently served as an Adjunct Professor of Law at JMLS and a Wheaton City Councilwoman.

In 2014, Sanguinetti served as not only the first Latina Lieutenant Governor of the state but of the entire country. In her four years in office, Sanguinetti has focused on helping to improve the lives of all Illinoisans through the delivery of more efficient government, providing health care access to all regions of the state, quality educational opportunities to all residents regardless of income or location, and economic opportunity to small businesses throughout the state. From humble beginnings in Hialeah, Florida, to become the nation’s first Latina Lieutenant Governor, Sanguinetti has never forgotten where she came from or lost the desire to excel in whatever role comes her way