Wheaton Experts: The Power of Debate

Wheaton College faculty members Dr. Rebecca Sietman and Dr. Jim Beitler sat down to speak about the power of debate. 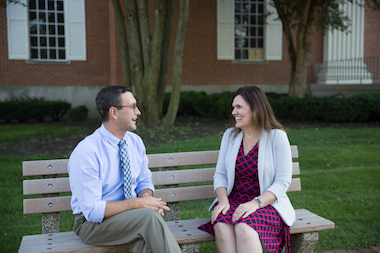 Is debate intrinsically argumentative? What can we learn from successful rhetoricians?

These questions and more are answered by Wheaton’s Dr. Rebecca Sietman, Assistant Professor of Communication and Director of Forensics, and Dr. Jim Beitler, Associate Professor of English and Director of First-Year Writing, who sat down to speak about the power of effective debate and rhetoric. Given that they studied at schools with an intense football rivalry—Ohio State and Michigan—it’s also notable that they were able model the art of civil discourse.

Why is learning the art of debate still important today?

SIETMAN: Critical thinking—the ability to criticize, analyze and advocate ideas—is one of the reasons debate is still important today. And while debate is not the only means for cultivating these skills, improved critical thinking is one important outcome of participation in debate.

Debate is also central to decision-making. Many people think of debate as combative, but debate is actually collaborative, bringing together multiple perspectives in the pursuit of truth. Of course in academic debate, there’s a winner and a loser, but the goal of debate is to enable people to reach good decisions through the wisdom of thinking through diverse perspectives.

BEITLER: I’d echo Rebecca’s points. Debate can help us cultivate discernment. When we dialogue with others through debate or listen to others do so, we have an opportunity to develop what the ancient Greeks called phronesis, or practical wisdom. Debate allows us to deliberate carefully about terms and issues, to measure the strength of our arguments, and to consider how we might act more effectively, and perhaps even more charitably, in the world.

Is it a dying art?

SIETMAN: To me, debate is not a dying art. Within the United States, applied debate continues to be vital in our courts of law and in politics, and academic debate is an important component of our educational system. Now that Wheaton Debate competes internationally, I see academic debate thriving all over the world, including areas of the world where debate has not always been a significant activity.

BEITLER: I agree with Rebecca that debate is not a dying art. I do think there’s a lot of toxicity in our public discourse right now, and unfortunately Christians are sometimes a part of the problem. I was reading Rowan Williams’ book Being Disciples with my students today, and one of his comments speaks to your question. Williams writes that our culture is experiencing “a loss of patience with argument, real mutual persuasion; a loss of the idea that by mutual persuasion and careful argument we might have our minds enlarged to receive more of the truth.”

I think the loss that Williams describes is real, and it’s certainly easy to become cynical in light of some of the examples of debate that we see on television. But I also think that, in light of the examples that Rebecca just mentioned, as well as the emphasis on rhetoric in many college writing and communication programs, there are reasons for hope. There are many models from the rhetorical tradition that we can draw on to improve our debate practices. One of those resources comes from the 20th-century psychologist Carl Rogers. In my field, writing studies, there’s an approach known as Rogerian rhetoric, and the idea is that when you’re debating or discussing a topic with another person, you have to summarize the other person’s points to his or her satisfaction before you’re able to give your own points. Models like that are very powerful ones and can help us move forward in constructive ways.

SIETMAN: Yes, as Jim described it, debate at its best is a powerful means of understanding the other. Because you have no choice over the topic or the side in academic debate, you often have to defend a position that is not your own. This allows people to see others and others’ viewpoints from a completely new vantage point. Once you have been forced to think through the best arguments for something you don’t agree with, you are more humble, more empathetic. This is what has made debate such a life-giving activity in my own life, and I wish more people could experience this aspect of debate.

I see family and friends who become angry and threatened when people they know and love disagree with them, asking questions such as, “How could you vote for that person?” or “that political party?” But debate has shaped me into someone who is not upset when others have radically different views from me. Debate has taught me that I don’t need to fear others or their views and that I can love and respect them as people created in God’s image without compromising my own views or my faith.

BEITLER: That is really amazing. An additional benefit is that even when you’re disagreeing with someone in debate, there’s often a need to agree on what’s at issue. So there is agreement in disagreement, at least in debate done well. In televised political debates, you’re not always going to see agreement about what’s at issue. The candidates often just talk past, or over, one another. But constructive debate identifies points of agreement. 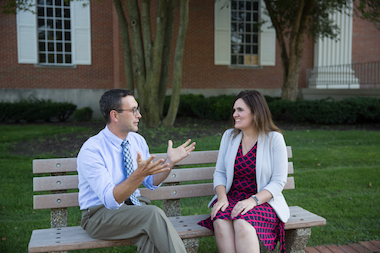 Jim, this question is for you. You recently published a book, Seasoned Speech: Rhetoric in the Life of the Church, which considers the rhetoric of five beloved Christian communicators, including C. S. Lewis. How can we draw on the experience of others to grow in our own rhetorical or debate skills?

BEITLER: The figures I write about are exemplary communicators, and we can learn a great deal by studying their rhetorical practices. As many scholars have noted, C.S. Lewis’s communication practices demonstrate a deep concern for his audience members: he endeavored to speak and write in ways that would reach the people he was trying to address. And he did so in part by writing in many different genres. He also urged other speakers to study their audiences, to get to know how their audience members used language. In other words—and this is something I discuss in more detail in my book—Lewis practiced a posture of goodwill, attempting to determine the needs of his audience members and address those needs as best as he could. That is something that Christians would do well to emulate.

Another takeaway from my book is that Christian witness can and should take a variety of forms. For that reason and many others, it’s crucial that Christians work to transform our public forums into spaces where many different voices can flourish. The inequalities of our society extend to the debate stage, and Christians ought to lead the way in dismantling such inequalities.

SIETMAN: One insight from political communication relevant to debate and rhetoric is the power of framing. Frames allow people to organize information and life events in a meaningful way and are useful for defining situations from a certain perspective. Within public debate and discourse, frames help to define problems and point to solutions for problems. Because frames compete with one another, successfully framing an issue helps to win the debate. If we see an issue being characterized in a way that is harmful, we have the power to provide a counter frame. The dominant frame doesn’t have to remain dominant. Using our voices to introduce a new way of thinking about an issue is critical to solving real world problems.

Christians, ethically and with great humility, can articulate and defend a way of looking at an issue that calls people to question a dominant frame and can be a powerful catalyst for change in a world in desperate need of hope, reconciliation, and restoration. 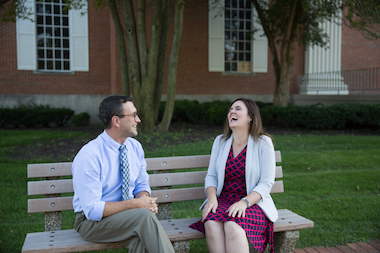 Why are rhetoric and debate such crucial parts of the liberal arts education?

BEITLER: The study and practice of rhetoric has long been central to the liberal arts curriculum, and for good reason. To return to some of Rebecca’s comments from the beginning, it improves one’s thinking, it improves one’s abilities to communicate, and it serves as a foundation for the study of other disciplines. Teaching students how to speak and write more effectively serves them well in their courses, in their daily interactions with others, and in their churches and future vocations. It’s vital to Wheaton’s mission.

SIETMAN: I often answer this question from the perspective of participating in academic debate, and I just can’t think of an activity that a student could do outside of their classes that is more liberal arts at its core than parliamentary debate, the style of debate we do at Wheaton. In every single debate round, my debaters are drawing on their understanding of history, their understanding of economics, politics, philosophy, communication, literature, and science. Students are actually using what they are learning in their liberal arts classes as a means of engaging in discourse about the various topics that we debate. It’s such a beautiful thing. If Wheaton professors could see how their students are applying class content to academic debate, they would be encouraged and inspired by the power of debate in furthering a liberal arts education.