Dr. David Cho is Wheaton College’s new director of the Office of Multicultural Development. This year, he looks forward to building relationships with College students and creating a welcoming place for them. 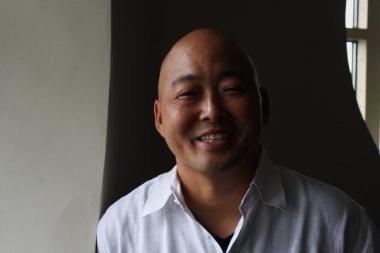 Wheaton College appointed Dr. David Cho as the new Director of the Office of Multicultural Development. Dr. Cho comes to Wheaton after 11 years at Hope College in Holland, Michigan, where he served as an English professor and the director of the American Ethnic Studies program.

The OMD at Wheaton College works to support students of color and to encourage the community to work towards diversity in Christian unity.

“The combination of David’s education in American ethnic studies, writing and literature, rhetoric and biblical studies; his experience as a professor, program director and elder; and his ability to shepherd students has prepared him well to serve as the next Director of Multicultural Development,” said Vice President for Student Development Dr. Paul Chelsen. “I look forward to the ways David will encourage students and the College to more clearly see God’s vision for the wonderful, interconnected, oneness with distinctiveness in the body of Christ.”

Throughout his career, Cho has worked to advance cultural engagement in everything from the books he assigns in the classroom to the conversations he has with various mentees. He also revamped Hope College’s minor in American Ethnic Studies. He is currently collaborating on a forthcoming book project focused on critical race theory and Christian theology.

Cho has also worked as a visiting professor at Seattle Pacific University, the University of Puget Sound and Wabash College. He is the author of Lost in Transnation: Alternative Narrative, National, and Historical Visions of the Korean-American Subject in Select 20th-Centry Korean American Novels, and a book of poetry, called Night Sessions, which was nominated for the National Book Award.

As he looks to the 2019-2020 academic year, Cho looks forward to building on the good work of his predecessor, Rodney Sisco, who passed away in December 2018. “Every time I walk into the office, I think that the presence of Rodney is here, so I want to honor everything that he did,” he said.

As he looks to this new academic year, Cho hopes to get to know all of the students and create a welcoming environment for them at the OMD. “I aim to be a good faithful friend, mentor and staff member, honoring the legacy of Rodney and letting those relationships work out as they should,” he said.

Cho also hopes to create a common curriculum on race and ethnicity, with the aim of giving staff and student leaders all a base set of information when it comes to diversity.

“Dr. David Cho brings a complete and excellent spiritual and professional background to strategically support and improve inclusive excellence within the Wheaton College community,” said Chief Intercultural Engagement Officer Dr. Sheila Caldwell. “I am looking forward to working alongside Dr. Cho because of his visionary leadership, faithfulness to Christ, and commitment to championing diversity and inclusion initiatives. His love for people and deep knowledge of Scripture will serve him well as he leads ongoing efforts to cultivate a campus environment for all students to flourish.”

Cho is married to Sandy, and they have three children: Jonathan, Sarah, and Joanna.--Emily Bratcher