Wheaton College welcomes Dr. Litong Chen, who is serving the College as a Visiting Associate Lecturer of Chinese in the Modern and Classical Languages department. 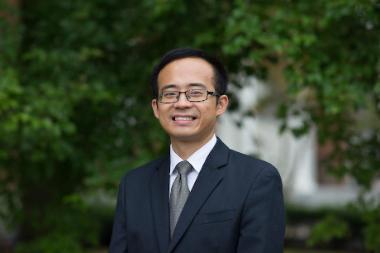 Name: Litong Chen
Education:
Ph.D., Chinese Linguistics, The Ohio State University, 2016
M.A., Chinese Linguistics, The Ohio State University, 2012
B.A., Chinese Linguistics, Renmin University of China, 2010
What was your favorite class in college?
Surprisingly, it was none of my major courses in linguistics but an elective course called "Christianity and 20th century Chinese literature." I was not a believer while taking that course, but it introduced to me some key concepts and tenets of Christianity from an academic perspective, which prepared me for the Gospel that came in later to my life. God is good.
Before Wheaton, what were you doing?
I was teaching at the University of Mount Union in Ohio. I hope Wheaton can beat them soon in the D3 football playoffs.
What big question are you trying to answer through your work?
The integration of faith and foreign language teaching; how Christian learners of Chinese interact with the target culture in humble, appropriate ways while not compromising their Christian faith.
What’s one interesting or intriguing thing that you have learned recently?
Among all the strategies to overcome socio-cultural-political barriers that exist between Chinese people and learners of Chinese as a foreign language, the most astounding solution comes from the Apostle Paul, who was willing to make himself “a slave to everyone to win as many as possible.” Like Paul, believers who study Chinese should seek to understand the social perspectives and values of Chinese people and be trained to show respect for the Chinese culture by adapting their behavior to Chinese cultural expectations without compromising their Christian identity. This is fundamentally an incarnational view of language and culture learning in which one lays down one’s own rights for the sake of meeting the needs of another who is “other.”
Do you get butterflies the night before the first day of school?
I did when I was in k-12 and thought it would be all right once I was in college. I was wrong. Then in college and grad school, I thought it would be all right once I became a professor. Well, I was wrong again.
What would you have liked to tell the freshman version of yourself about going to college?
Read as many books as you can while at school, and travel around the world as much as you can in the summer!
When you’re not teaching or researching, what do you like to do?
Playing with my two daughters, all day long.
Learn more about Modern and Classical Languages here.
Contact Us