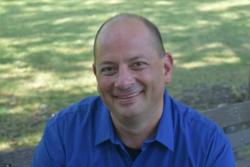 The Fulbright Program is the flagship international educational exchange program sponsored by the U.S. government and is designed to build lasting connections between the people of the United States and the people of other countries. Recipients of Fulbright awards are selected on the basis of academic and professional achievement as well as record of service and demonstrated leadership in their respective fields.

Van Dyke, who directs Wheaton College’s M.A. in Marriage and Family Therapy, has taught and practiced for about 20 years. He will teach, conduct research, and share his expertise at Eszterházy Károly University during the 2018-2019 academic year as part of a grant to participate in curriculum redesign and to teach marriage and family therapy.

Van Dyke’s project builds on his past work in the region, including a spring 2015 collaboration between Wheaton faculty and a group of psychologists from the Czech Republic who together established the Central and Eastern European Mental Health Conference.

Since the 2015 trip, Van Dyke has spent time each year in Prague, where he supervised, trained, and consulted with mental health professionals from nine central and eastern European countries (Hungary, Czech Republic, Slovenia, Slovakia, Romania, Ukraine, Croatia, Bulgaria, and Serbia).

Van Dyke specializes in systemic theory, which views pathology and healing in the context of relational and organizational contexts, rather than just focusing on individuals. In his previous collaborations with colleagues in eastern Europe, Van Dyke learned about unique relational and systemic needs in the region, and specifically in Hungary, where two-thirds of all marriages end in divorce. Marriage rates in Hungary have also declined to one of the lowest in the European Union, and overall health has also been in decline.

“There is a need for more clinical, supervision, and academic training in systems theory,” Van Dyke says. “My desire is that this experience begins a collaboration to train and equip clinicians in central and eastern Europe. I hope future partnerships will strengthen marriage and family relationships.”

In addition, Van Dyke plans to research and develop a post-masters certificate in marriage and family therapy that is culturally appropriate for central and eastern European professionals and meets EU regulations.

“This project is about beginning a mutually beneficial process of learning from each other and exploring our joint resources that can be brought to bear in strengthening relationships, like marriages and parenting, for the next generations in central and eastern Europe,” he says.

The M.A. in Marriage and Family Therapy program at Wheaton College seeks to form therapists who are clinically skilled; who integrate their personhood as followers of Christ in their professional and personal lives; who value interpersonal justice and the diversity of clients and client systems; and who work toward the goal of healthy and whole relationships, giving specific attention to those on the margin of society and those who are underserved. Find out more information about this master's program.

Learn More About the M.A. in MFT
Contact Us