C.S. Lewis on Image and Imagination: Some Romantic Reflections

This event featured University of Cambridge Professor Dr. Douglas Hedley, who is currently on Cambridge's faculty divinity.  Hedley focused on Lewis's book Till We Have Faces and its connections with nineteenth-century British Romanticism.  This lecture was sponsored in conjunction with Wheaton's own Marion E. Wade Center, a major research collection of materials by and about seven British authors including Lewis. 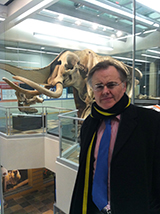 In March 2002 he was Directeur d'études invité at the EPHE, Sorbonne, and from January to March 2004 he was the Alan Richardson Fellow of the Theology Department in Durham. He is, with Lieven Boeve and Wim Drees, editor of the Series 'Studies in Philosophical Theology' published by Peeters in Leuven.

In December 2006 Douglas Hedley was the Teape lecturer in India, lecturing in Bangalore, Delhi, Kalkotta and Hyderabad. He has been external examiner at the Universities of Manchester and Oxford.

Douglas Hedley studied Philosophy and Theology at Keble College, Oxford and in 1992 gained a doctorate in the Philosophy Faculty at the University of Munich under the supervision of Werner Beierwaltes. In 1993 he was awarded a post-doctoral Fellowship by the Deutsche Forschungsgemeindshaft for work on seventeenth century theology and the Cambridge Platonists.

In 1995 he taught at Nottingham University and in 1996 moved to the Divinity Faculty in Cambridge.

His recent books include Living Forms of the Imagination (2008) and Sacrifice Imagined: Violence, Atonement and the Sacred (2011).