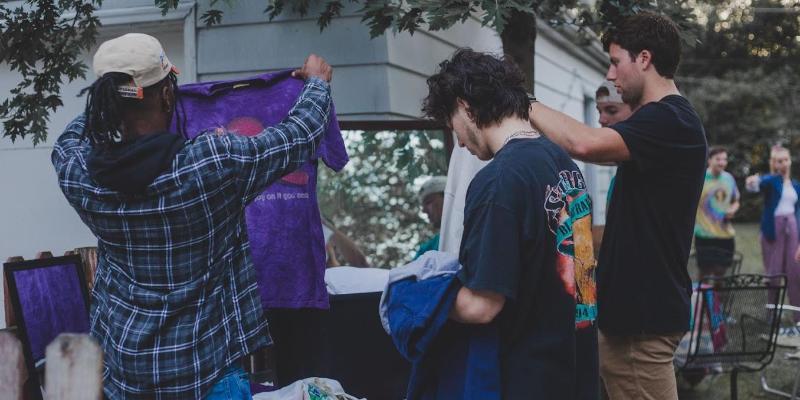 When Terrelle Brown '22 and Daniel Leadbetter '22 first moved to Wheaton, Illinois to attend Wheaton College, they found themselves drawn again and again to Sandberg’s Store on Front Street in downtown Wheaton. They were intrigued by the mysterious storefront’s windows, which were filled with dust-covered vintage jerseys and jackets, sports memorabilia and dress clothes, but the shop was scarcely—if ever—open. 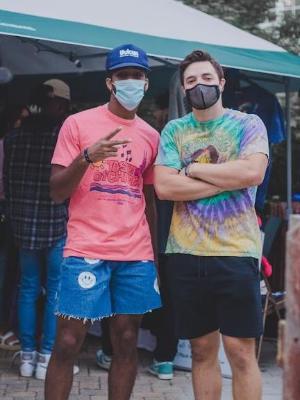 Meanwhile as the years passed, Brown and Leadbetter—both Business and Economics majors and Wheaton Thunder wide receivers—were learning more and more in their classes about redemptive entrepreneurship, this idea of joining God in His work of creative restoration through innovative business.

“What if I could redeem the things I’m wearing?” Brown remembers asking himself.

That idea became the inspiration for Paradigm Thrift and Vintage, which sells secondhand clothes online and through pop-up stores. Its mission comes from John 6:12: “Let nothing be wasted.”

“One of the best things about teaching entrepreneurship at Wheaton is getting an inside view of some of the students’ remarkable business ideas,” said Wheaton’s Hudson T. Harrison Professor of Entrepreneurship Dr. Denise Daniels. “Terrelle’s vision for Paradigm Thrift is shaped by his faith, and connects his love of fashion, his concern for the environment, and his love for people who come to shop his vintage and thrift finds. Paradigm was one of the prize winners in this year’s Thunder Pitch, a business pitch competition for Wheaton students, where the judges were equally impressed by the passion and planning that have gone into the development of this business.”

Initially, Brown’s entrepreneurial idea was to approach the Sandberg family about helping them to move their inventory online. But in summer 2020, he came to a deal with the family, in which Brown would buy the inventory he wanted and remove it from the shop.

Over the summer, Leadbetter joined the entrepreneurial venture and he too bought and stashed boxes of clothing.

“He gave me his vision for everything and I just thought it was a really good idea and it was a cool way to use things I’d learned in class as well,” Leadbetter said.

In addition to buying and stashing clothing in their off-campus housing, they also made plans about how to market the idea and move the inventory. In September, they held their first pop-up event on their back patio.

“I think both of us were expecting a pretty minimal turnout,” Leadbetter said. “But we actually came out from [football] practice and we already had people waiting outside 20 minutes before it was time to start and ended up having way more people come through than we thought.”

Their next pop-up in October was held at local burger place 302 Wheaton, and it was even more successful. In mid-November, they launched their website, which contains items like Chicago Bulls t-shirts from the ’90s and vintage Bergati sweaters for sale. In December, they held their third pop-up at local barber shop Qkutz.

Both Brown and Leadbetter are encouraged about the success of the venture, and they’re also grateful for the support from Wheaton faculty they received along the way.

“The Paradigm Thrift team is onto something,” said Ben Norquist, Program Lead for the CFI iLab. “They've understood that their community doesn't want to be consumers anymore--they want their purchasing to be part of healing broken things. Paradigm is finding ways to help their community help the environment by extending the lifecycle of clothing. But that's not all, they're putting together a brand that contains a message of hope--we can find beauty and meaning in the ruins, in late-cycle fashion--as we follow Jesus' instructions to the disciples to gather the leftovers and let nothing be wasted.”

Currently, Brown and Leadbetter are constantly on the hunt for more clothing to add to their inventory. Eventually, they hope to move into a storefront, but they’re quick to point out the mission behind their ambitions.

This is about more than just the business, Leadbetter said, adding, “We also want to spread a positive message about letting nothing be wasted.”

Brown added: “That motto comes from John 6:12 after Jesus feeds the 5,000, and the disciples are looking around at all these leftovers, and Jesus said go pick up these pieces so that nothing is wasted. . . . This is why we’re doing what we’re doing.”