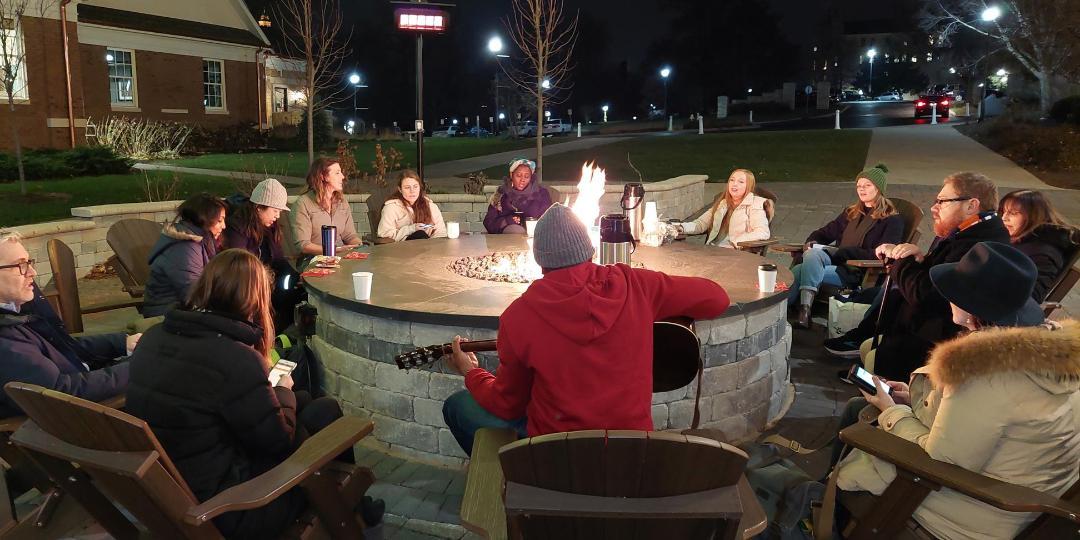 Meeting Around the Firepit on Campus

In the past year, the United States alone has faced the ongoing COVID-19 pandemic, the southern border humanitarian crisis, wildfires raging on the west coast, hurricanes, tropical storms—the list goes on. That’s not to mention the ongoing international crises such as the Afghanistan and Venezuelan refugee crises, catastrophic floods, typhoons, and cyclones in east Asia, and the devastating earthquake in Haiti. Disaster relief is an overwhelming need at all times.

The Humanitarian Disaster Institute (HDI), founded by Dr. Jamie Aten, responds to that persistent need. Shortly after moving to south Mississippi in 2005, his community was hit with Hurricane Katrina. Aten was left shocked by the damage. What disturbed him even more was the lack of theologically sound, scientifically rooted resources available for local churches to use to support their suffering community. The idea of HDI was born and five years later Aten brought the idea to Wheaton where he established the first faith-based disaster relief institute. Aten now serves as the co-director of HDI.

HDI produces research, resources, and events all aimed at equipping global leaders and church leaders for humanitarian assistance in the wake of a disaster. From the very first days of the COVID-19 pandemic, for example, HDI was releasing resources aimed at preparing churches for the onslaught of challenges that a global disaster of this caliber would incur. 16,000 people attended their two digital summits on equipping church leaders to respond to the coronavirus. Thousands more participated in their spiritual and emotional care courses, and pastors globally have consulted HDI’s resources on reopening churches. In just six months, HDI reached over 603 million people through their COVID-19 related online events, articles, and videos. And their impact only continues to grow.

This is what HDI has been doing since its start in 2011. From pandemics to hurricanes to refugee crises to mass shootings, HDI’s mission is to “help the church prepare and care for a disaster-filled world.”

Graduate students in the M.A. in Humanitarian and Disaster Leadership (HDL) program are both contributors to and activators of HDI’s work, multiplying its reach and carrying it on even after graduation. The masters program was launched in 2018 and now has 53 students enrolled. 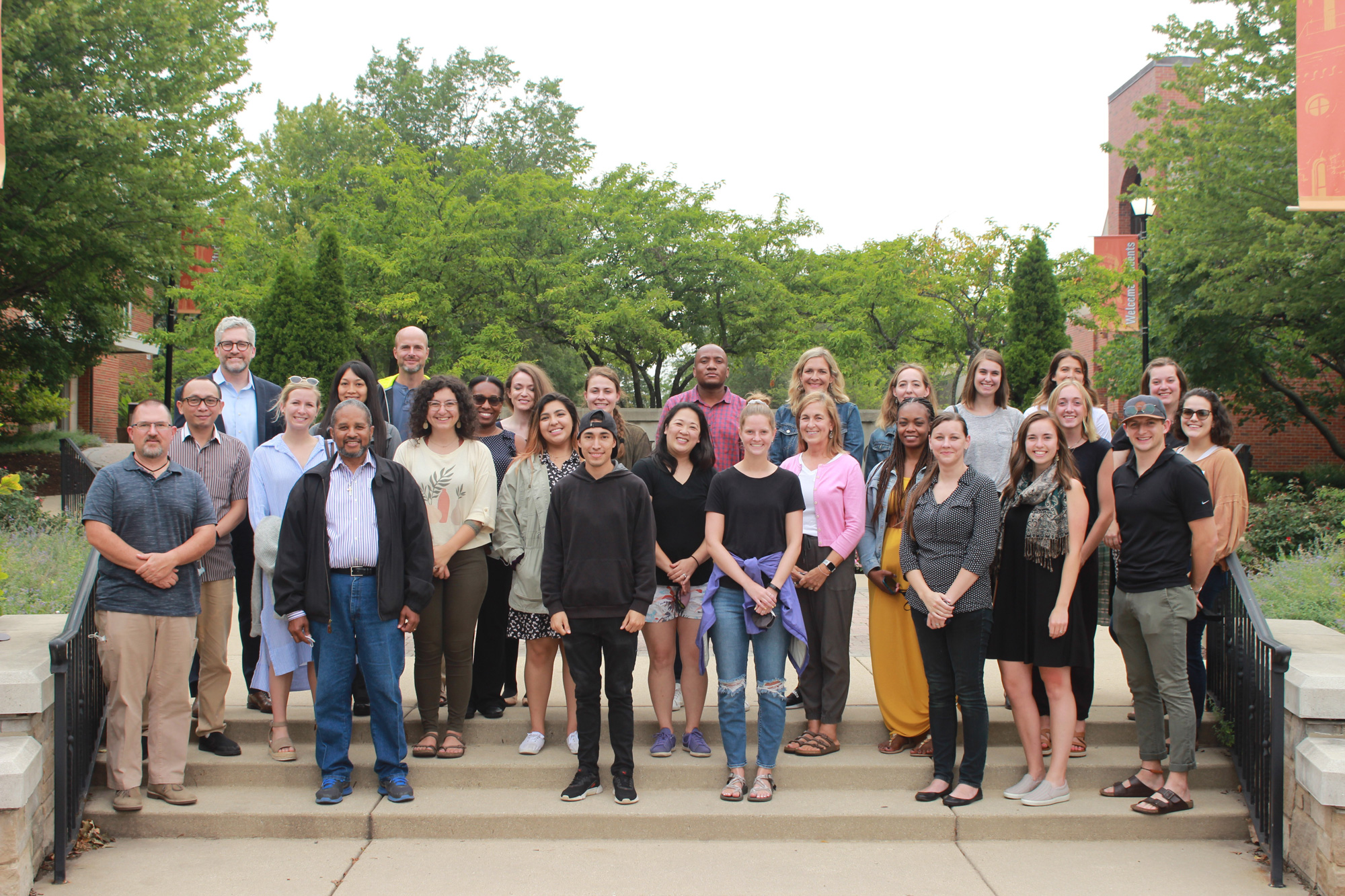 Kent Annan, Co-Director of Humanitarian and Disaster Leadership, was brought onto the HDI team in 2017 to help launch and direct the masters program. “We want to be guided by our love for God and our love for neighbors,” Annan said about the program. “We’re preparing students to be able to love in the very best ways possible and also to have the formation necessary to be able to serve the calling God has on their life for the long term in a demanding field.”

Graduates of HDL have gone on to work for government agencies like FEMA, nonprofits like World Relief and Red Cross, refugee organizations, and international missions organizations.

Logan Penovich M.A. ’20 already had several years of disaster relief experience under her belt with FEMA and AmeriCorps when she began wondering about the deeper questions of why they were doing what they were doing. Her search for answers led her to the HDL program.

“I thought I’d get answers from getting a masters degree,” Penovich explained. “But I was engaged in a higher level of thinking that made it a lot more messy. There wasn’t necessarily a right or wrong answer. [HDL was] setting us up with a toolkit that would allow us to do the right thing in the moment and be able to handle it when it’s something else in the next moment.”

That “toolkit” includes holistic training in emergency response, NGO leadership, anti-human trafficking and violence intervention, disaster managment, and the list goes on. HDL also recently partnered with the Clinical Mental Health Counseling program to offer a trauma certificate. Students have the opportunity to put their newly equipped toolkits to work, traveling to disaster sites around the globe during their time as a student.

HDI often deploys teams to participate in on-the-ground work. In response to the Afghan refugee crisis, for example, twelve HDL students traveled to military bases across the nation to welcome the first wave of refugees. Other times, students and faculty go straight to ground zero, whether it be to the Kakuma refugee camp in Kenya or to Puerto Rico after the 2017 hurricane or to Tigray amidst the political unrest in Ethiopia.

HDI’s work is not just international. The work starts locally. In 2018, HDL students initiated a resource drive for people affected by Hurricane Michael, collecting supplies for both the cleanup crews and the damage victims. Though the hurricane happened hundreds of miles from Wheaton, the community was invited to take part in supporting their national neighbors.

“How do you respond to what happens in your community?” Annan asked. “HDI wants to serve in ways that are applicable to most people day to day. We want to help people who are responding to events big and small around the country and around the world.”

Beyond the leadership team and the HDL students, Wheaton faculty members across several disciplines contribute to teaching and research. Researchers from universities across the country are also involved with HDI’s work as contributing scholars.

In January of this year, HDI partnered with Christianity Today to launch “The Better Samaritan,” a blog and podcast seeking to “do good, better.” From this platform, Aten and Annan disseminate some of the research HDI produces, teaching listeners and readers about being better neighbors.

With such an impressive resume, it comes as no surprise that HDI has been recognized nationally for its significant strides in disaster relief. Among a litany of other awards over the years, Aten was awarded the FEMA Community Preparedness Champion Award at the White House in 2016. 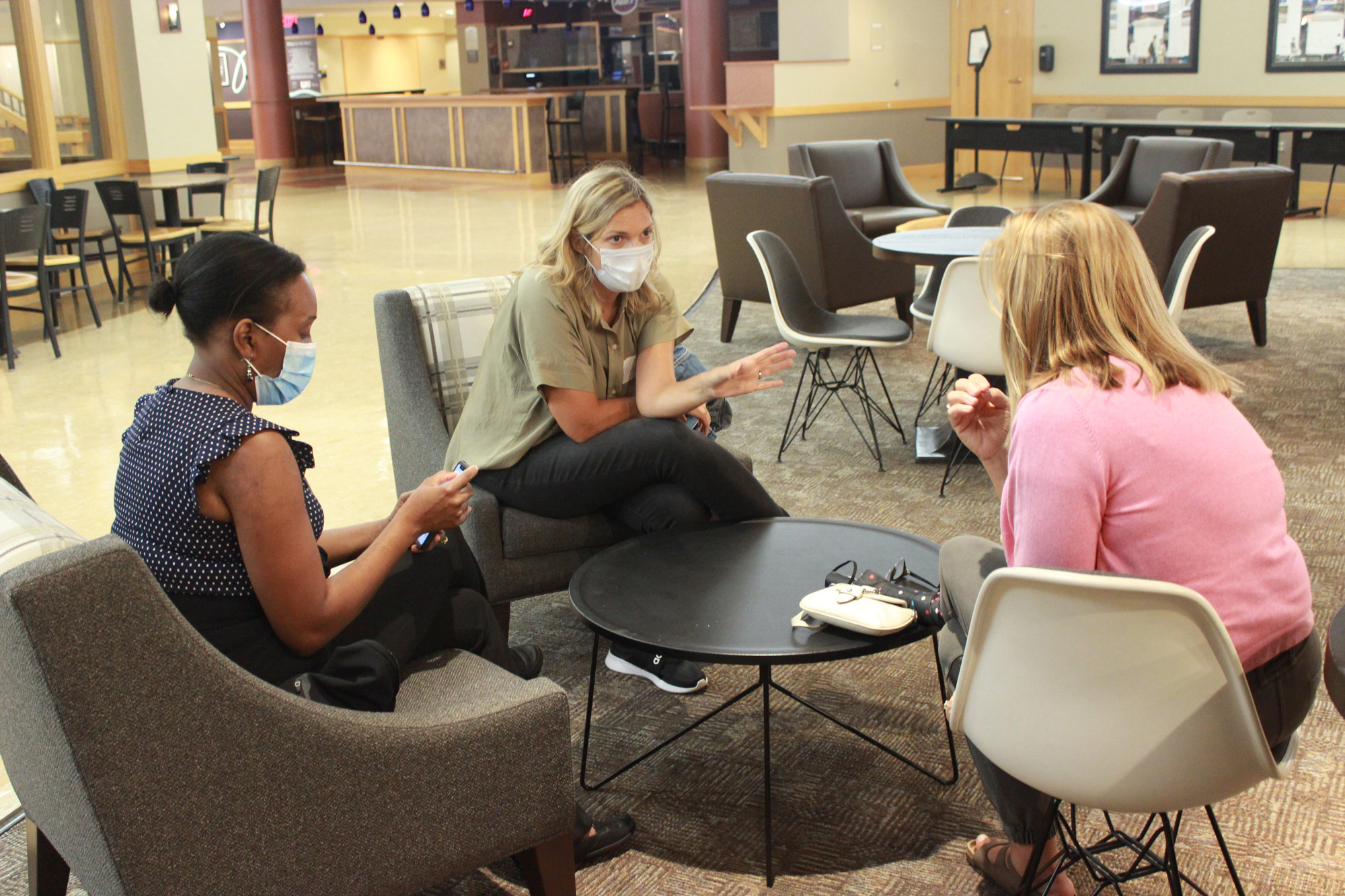 It’s hard not to be amazed by the massive reach HDI has achieved and maintained over just ten years. Aten credits it all to the diligence and passion of the HDI and HDL team. Yet even despite all that has been accomplished in the past decade, the work is only beginning. “The need continues to drastically outweigh the capacity we currently have,” Aten said.

Sifting through the ever-present needs of a groaning world can be a wholly overwhelming task. Entering into areas after a highly traumatic event creates intense psychological and emotional stress for not just the victim, but also the caregivers.

“There’s a heavy emphasis on care for the caregiver. We learn to set boundaries early on to avoid compassion fatigue and burnout,” Isaya Otsuka ’20, M.A. ’21 said of the HDL program. Upon graduation, Otsuka began working with DAI, a global development organization. “There’s a lot of responsibility and a lot going down, so it would be tempting for me to really throw myself at the work. HDI helped me to understand that in order for my work to be sustainable and at the level of quality that it should be, I have to set boundaries.” 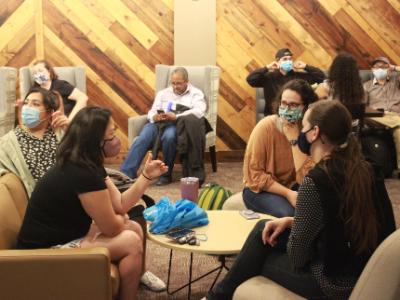 Setting boundaries becomes challenging when faced with the issue of quantity. Disaster never sleeps and there is no shortage of crisis zones that are in need of relief. For the present, deciding where to pour time and resources is based largely off of HDI’s existing connections. As their alumni pool grows, so will their network, continually expanding their reach potential.

HDI leaders and HDL students are quick to acknowledge, however, that no matter where they go, their influence is useless if not coupled with humility. “We’re not there to give a hand out, we’re there to create a hand up,” Penovich said. “How can we bring people up and get on their level at the same time?”

She passed on an example that she learned in one of her courses. A natural impulse in an effort to solve the poverty issue is to teach a trade in hopes that it produces a more substantial income. However, sending one person off to learn a trade means one less source of income for their family in the meantime. While the long term effects might be beneficial, in a situation where each little bit of money counts, the short term effects would be detrimental. HDI searches for sustainable solutions that honor the needs of the community foremost.

Perched on one of Annan’s bookshelves is a pair of worn plastic sandals. During my interview with him, Annan pointed to them and explained that they once belonged to a man that he met in a Ugandan refugee camp. The man explained the difficulty of trekking through the bush and farmland with the worn shoes which prompted Annan to trade his leather sandals for the plastic pair. His were sturdy and would last the man a long time. Those plastic sandals remind him that “when we step into people’s lives, we’re stepping onto holy ground. Like Matthew 25 says, we’re having an encounter with Christ as we’re loving our neighbor who is in need. We have to take stepping onto holy ground really seriously and that involves faith formation, research and best practices, developing as leaders. We need God’s grace.”

An Educator Encounters the Lord’s Promised Future and Hope

“We Aren’t Meant to Be Alone”