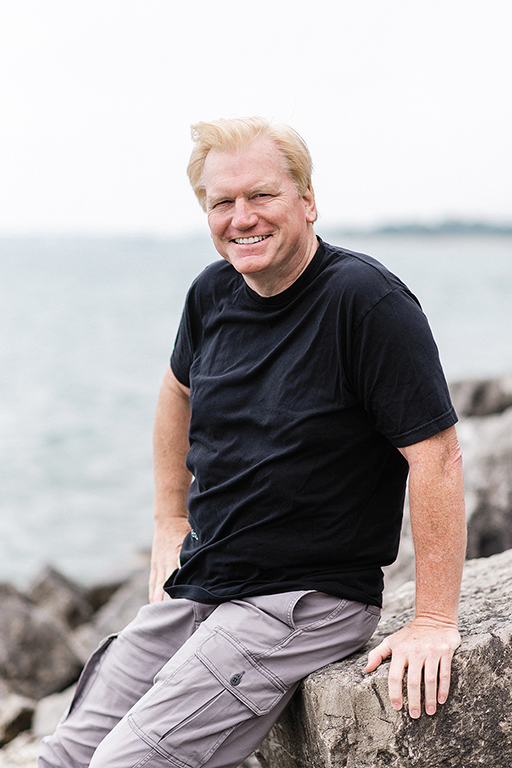 Although Jim Poole ’82 enjoyed the intellectual stimulation and ample opportunities to explore the integration of faith and learning during his time at Wheaton College, he also reflects on how fellow Wheaton graduates continue to represent God’s love and care to him today. “Wheaton forces me to rethink my faith every time I meet someone connected to the College,” Jim said. “I see someone from Wheaton, I immediately think of my faith, and suddenly I’m more aware of things beyond myself, asking questions about how God is in play here.”

Jim calls these “interruptions.” These are moments in life when people intervene and remind him of God’s goodness. He relates this idea to an experience he had as the Student Director of the Orientation Committee during his junior year at Wheaton. A fellow member of the committee was supposed to give the opening speech to a crowd of freshmen in Edman Chapel, but at the last minute, asked Jim to fi ll in out of a fear of public speaking. So, Jim did it on the fly. As this was supposed to be a “big inspirational speech,” Jim would have to pull some of his own theatrical anecdotes to get the ball rolling. After some pithy remarks and quotes, President Armerding, sitting behind Jim in one of the throne-like chairs up on the chapel stage, audibly cleared his throat. That was Jim’s cue—his “interruption.” He needed to wrap things up and get back to his seat so other things could start happening. “That interruption episode perhaps foreshadowed future encounters with Wheatonites,” Jim explained.

Some years after graduation, Jim was working as a freelance actor in Chicago, longing and praying to find creative ways to glorify God with his artistic craft. He crossed paths with Matt ’82 and Arlene Johnson Heard ’83, fellow Wheaton grads who actually did not know Jim all that well. They ended up persuading him to get in on the ground floor of a church plant in Lincoln Park. (The church has since multiplied in other locations.) Their call to join in ministry “interrupted” Jim’s life and he ended up serving as a creative director for the church for 18 years. “I enjoyed many golden years there integrating my faith and my art,” Jim said. “It’s this type of thing that tends to bolster one’s belief in the possibility of answered prayer.” Through the church, Jim also met David Fitch ’77, who became a good friend and served as another healthy “disruption” in Jim’s life.

Jim has also had opportunities to work with Wheaton College’s Shakespeare in the Park. An old friend, Dave Reifsnyder ’82, called Jim out of the blue and invited him to perform in a few plays with other alumni and current Wheaton students. Before each performance, the actors would gather in a circle and pray, serving as joyous collaborators in an artistic production that both glorified God and brought the actors ever closer as brothers and sisters in the faith. Jim also spoke of past moments of genuine communion with fellow believers.

“There are many other examples of fellow classmates, like Ken Wicker ’82, Jeff Meyer ’82, Jeff ’82 and Sonia Harris Semenchuk ’83, among others, intersecting in and out of my life after college, interrupting it,” Jim said. He went on to say that these people all represented aspects of God’s kindness, care, and presence in ways that caused him to rethink his faith. “They don’t even do anything in particular, just who they are makes God a bit more real to me.”

Jim’s life has been a testimony to the workings of the Holy Spirit through the corporate body of Christ. Jim needed the people of God, and the people of God needed him. Like an actor in a cosmic drama, he learned that we all have an important role to play in spreading Christ and His Kingdom.