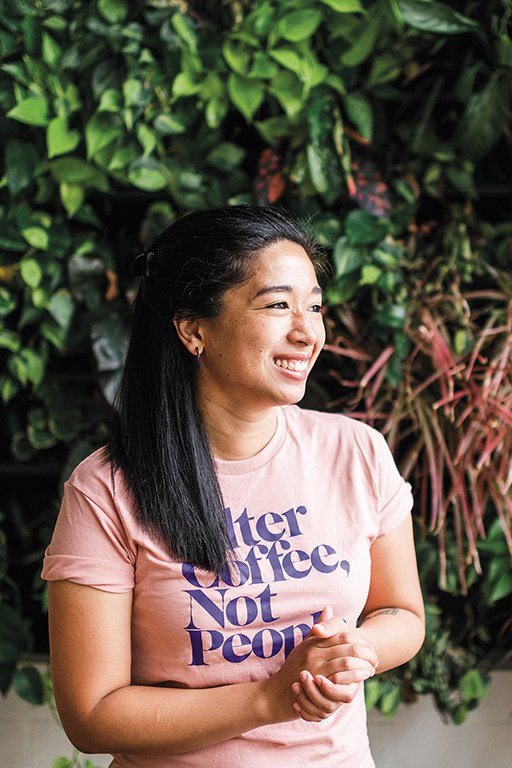 “Authenticity is not just about saying whatever you want whenever you want. It’s about being intentional with your realness,” said Melissa Villanueva ’12, CEO and founder of Brewpoint Coffee.

Her commitment to fostering honest and welcoming communities began with a wake-up call. Right out of college, Melissa landed a high-level job at a large corporation in the heart of Chicago.

“It checked off all the boxes of what I thought success meant post-college,” she said. “But I couldn’t shake the fact that I wasn’t happy.”

She stuck with the role for three years until she met her now-husband, Angelo. During their first official date, he encouraged her to leap beyond the normal expectations for a successful millennial and “dream about what I wanted to do with my life.” The very next day, Melissa quit her job—much to Angelo’s initial chagrin.

Melissa spent two months in the Philippines as a way of tapping into her Filipino heritage and growing in an understanding of how she wanted to contribute to the world. During that time, she became caught up in the potential to chase after her longtime dream of opening her own coffee shop. Upon returning to the States, she scoured the internet looking for an espresso machine, and providentially stumbled across a coffee shop in Elmhurst, Illinois, that was being sold on Craigslist. When she visited the space, she was certain this would be the site of her cafe. A few months and hundreds of work hours later, Brewpoint Coffee was open for business.

“An entrepreneur is someone who gets to build an ecosystem,” Melissa said, unpacking her motivations behind starting her own company. “The things that are most frustrating in this world right now often stem from the fact that many leaders have profit and power as their main measures of success. We’re not brought up to think about how the decisions we make impact the Earth and those around us. But for us, this [business] is primarily about creating a world that’s fulfilling for everyone who is a part of it.”

Over the past seven years, Brewpoint has expanded to include a roastery, multiple cafes and partnerships, and Brewpoint Craft, a branded initiative built around “coffee, cocktails, charcuterie, and clean air.” Melissa and her husband also hope to work on an economic development initiative to use coffee shops as a means to build up communities of color.

They don’t want to stop at seeming “diverse” on paper, she explains. She wants to commit to living alongside and encouraging growth in socially marginalized communities from the inside out. “Diversity doesn’t have to look like an equation,” Melissa affirmed. “It’s ultimately about building relationships and intentionally living with people who have had a different experience of the world than you.”

“We have this platform that we want to steward to the best of our abilities in light of the values that we think are important,” she added. “At the end of the day, in terms of the imago Dei, people are made in the image of God and are immensely valuable, and we should treat them as such.”