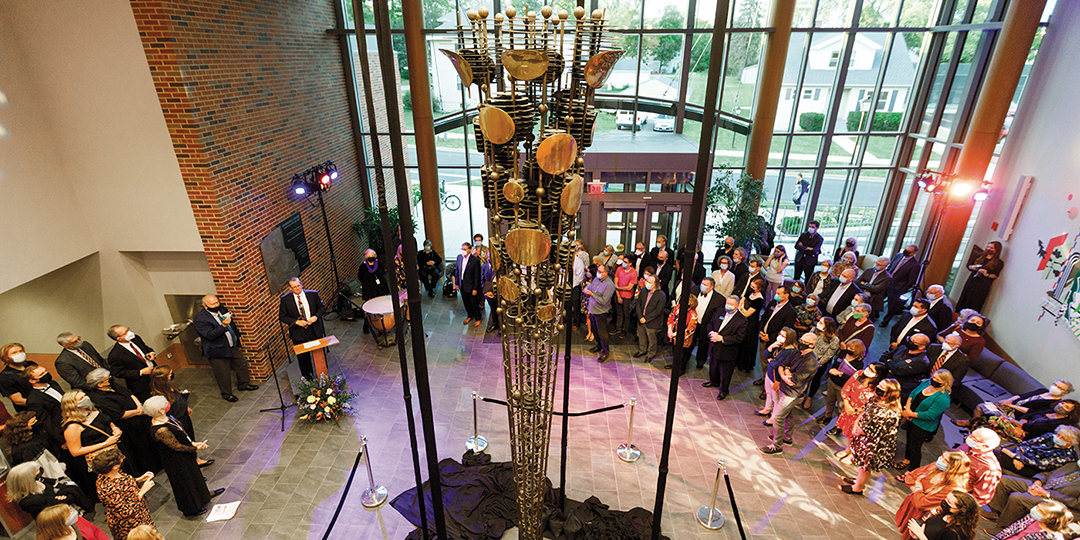 Unveiling of “Trumpet in the Universe (soli Deo Gloria)” by sculptor Liviu Mocan in the Armerding Center for Music and the Arts.

After a cumulative eight years of planning and construction, the completed Armerding Center for Music and the Arts was inaugurated with a Grand Celebration on September 25. The event also launched Wheaton’s Gala Year of the Arts, Faith, and Imagination.

The celebration consisted of several musical showcases, including two concerts in the new 648-seat Concert Hall, featuring choral and instrumental performances. Guests were also invited to an open house where they could tour the facility and interact with conservatory students and faculty members.

A central component of the Grand Celebration was the unveiling of “Trumpet in the Universe (soli Deo gloria)” by Romanian sculptor Liviu Mocan. Situated in the center of the main atrium, the sculpture stretches from floor to ceiling at over 17 feet tall. The magnificent pillar is layered with brass spheres and supports, and the twelve-sided base is inscribed with various quotes and contributions from pivotal scientists, writers, theologians, and musicians, illustrating the liberal arts.

While the two-phase project was officially completed in August 2020, festivities were limited due to COVID- 19. In addition, spaces such as the Concert Hall and dance studio were being utilized for socially distanced classrooms throughout the 2020- 2021 school year. In consideration of these obstacles, Dean Michael Wilder chose to postpone the Grand Celebration events until they could take place at full capacity.

As a result of the postponement, hundreds of community members, students, faculty, staff, and friends of Wheaton were able to attend. Liviu Mocan and his wife came from Romania to unveil the sculpture, along with two Armerding family members and donors from all over the country. Community School of the Arts students were also invited to attend and showcase their musical talents to the guests, alongside a student orchestra from West Chicago.

“It felt like the building was humming with energy and life and vitality and music,” event manager Lacey Case said. Exactly as it was intended to be.