The Symphony of Salvation: Praying with Malankara Orthodox Christians

This blog features stories about the Wheaton College Graduate School. M.A. in History of Christianity student Blake Adams recently had the unique opportunity to attend a theology retreat on the Church Fathers sponsored by the Malankara Orthodox Syrian Church, also known as the Orthodox Church of India. Blake shares his reflections on this moving ecumenical experience in this week's story.

The Symphony of Salvation: Praying with Malankara Orthodox Christians 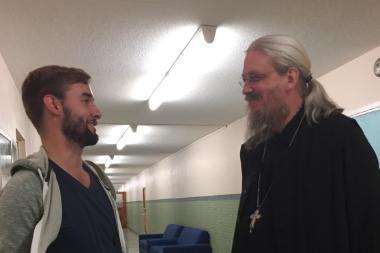 Noticing the worshipers ahead of me remove their shoes before entering the chapel, I followed suit. I wore sandals that day. Now I was barefoot in church. There were eight of us gathered for the afternoon office. I soon suspected the pews were residue from the chapel’s Catholic days, for we remained standing for the duration of the office. The only exception was, at different points close to the beginning and the end of the liturgy, worshippers made the sign of the cross, dropped to their hands, bowed their heads to the floor, straightened on their knees, and made the sign again before standing. This was done three times in rapid succession.

The reason, I would learn later, is that the Orthodox believe strongly that prayer means entering the presence of God. Just as we would stand or bow if royalty were to enter the room, it follows God is deserving of the same display of respect. Eager to discern the spiritual significance in every detail, I asked if this was also why they removed their shoes, “like Moses when he stood on holy ground?”

“It is good to think that,” responded a deacon, graciously, “but it is just good manners. In India, you always remove your shoes before walking indoors. That is the custom.”

The Malankara Orthodox Syrian Church, or the Orthodox Church of India, is an ancient tradition that claims its origin in the ministry of Thomas, one of Christ’s twelve apostles. At any rate, by the time Catholicism and Protestantism were introduced to India in the 16th century, the Malankara Orthodox had called it home for centuries. While the church is small relative to the population of India (79.8% of the population adheres to Hinduism; 2.3% to Christianity, making it the second-largest minority religion after Islam) it has steadily grown. Today, the Malankara Orthodox Church is six times as large as it was in the 1950s with over 400,000 members worldwide.

Obscuring the sound of my feet clapping on the polished tiles is the first thing to impress a Protestant about the Malankara way of worship: the noise. In Orthodoxy, prayer is a tonal language. And the noise is continuous. To my untrained ear, it sounded confused — reminding me of the Appalachian churches from my childhood when attendees, as the Lord led them, knelt before the altar to make their personal heart-prayers simultaneously. But after a few days, I began to discern the rhythms of the tones, and even to join in. As our voices mingled, the random sounds harmonized into a verbal dance. 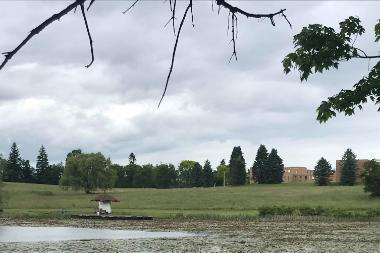 The property on which I was praying (barefoot) was the Holy Transfiguration Retreat Center, a former Catholic seminary sitting on several hundred acres in rural Pennsylvania. For the Malankara, it represents the fulfillment of a vision to see their tradition planted in America. “We hope to be salt that flavors America,” says Fr. Thomas Sujit, custodian of the property. “We hope to interact with all types of people. We not only think we have something to offer, but we hope to enriched, as well.”

The property is used to host conferences and prayer retreats. While open to all traditions, all acknowledge their host, Orthodoxy. Last year, the theme of the conference was Syriac liturgy. Participants observed all seven offices and learned all eight tones. This year, the theme was early Christian writings. Dr. John Behr, a preeminent Patristics scholar and a priest in the Orthodox Church in America, lectured on the works of Melito of Sardis, Irenaeus of Lyons, Origen of Alexandria, and others. “The conference was aimed at an audience that would enjoy such study,” explains Dr. Sujit. “We read the Church Fathers together and see how Christian theology has its beginnings, both historically and biblically.” I only had the opportunity to participate because they offer a generous discount for graduate students.

Aside from the noise, the pace of the office is the second offense to Western sensibilities. We pray at a gallop, carried by the tonal current. In my tradition, Anglicanism (and I imagine in Western Christianity generally), prayer is a ponderous ordeal, spoken at a reduced cadence as if to give the worshipper opportunity to reflect on the words, absorb them, and make them his own before moving on to the next item.

Doing my best at the chants, prayer was no longer a personal project I offered from my pew; prayer had the new sense of something done to me, like a stream carrying me along. Pauses were like bumps in the flow: the unfortunate result of fumbling for the correct page in the prayer book or tripping over a new tone. The most masterfully executed liturgies were seamless. Silence is not a welcome pause between liturgical movements, as it is tactfully used in Anglican liturgies, but a distraction to be endured. 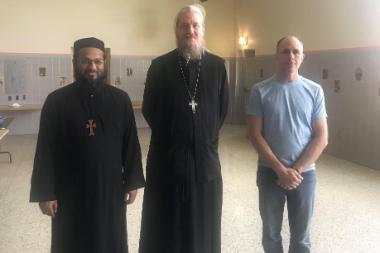 In addition to the Bible, the writings of the Church Fathers and Mothers are an ecumenical nodal point: a literary deposit shared in common by all Christian traditions. This fact was reflected in the theological diversity represented by the turnout, though it was fewer than hoped for. Besides myself, there was one other Protestant at the conference, Robert, a Baptist from Virginia (pictured (R) with Fr. Thomas Sujit (L) and Fr. John Behr(C)). For both of us, this was our first personal exposure to Orthodoxy outside of books. Even the presence of Dr. Behr testifies to the diversity within Orthodoxy. “Technically, our traditions haven’t been in communion with each other for centuries,” said Dr. Behr, exchanging a grin with Fr. Sujit over Wednesday’s vegan burgers. He cited a lesson from Irenaeus, who identifies the seemingly cacophonous voices of the faithful across history as “the symphony of salvation.” Briefly, their writings set the stage for an encounter between East and West.

“One of the beliefs of the Orthodox is unity in diversity,” explains Fr. Sujit. “Diversity is not the opposite of unity, but the proof of unity.”

Blake Adams is a graduate student the Wheaton College Graduate School in the M.A. in History of Christianity program. He studies early Christianity and teaches Latin online. He lives with his wife in Elburn, IL.