In an awards ceremony in Washington, D.C., Wheaton College alumna Dr. Kristina Anderson-Teixeira ’02 was honored with the Presidential Early Career Award for Scientists and Engineers. 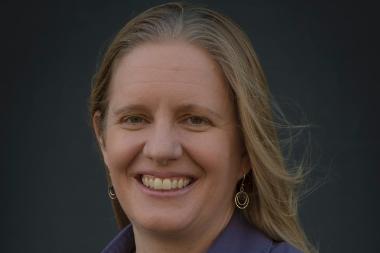 Wheaton College alumna Dr. Kristina Anderson-Teixeira ’02, a forest ecologist at the Smithsonian Conservation Biology Institute’s Conservation Ecology Center and at the Smithsonian Tropical Research Institute’s Center for Tropical Forest Science, was recognized with the Presidential Early Career Award for Scientists and Engineers. Anderson-Teixeira was honored during a ceremony at the DAR Constitution Hall in Washington, D.C., on July 25.

The U.S. government bestows PECASE awards each year to outstanding scientists and engineers in the early stages of their independent research careers who demonstrate “exceptional potential for leadership at the frontiers of scientific knowledge during the twenty-first century,” according to the National Science Foundation.

“I am deeply honored to receive this recognition,” Anderson-Teixeira said. “Science is a collaborative effort, and I’m very grateful for the contributions of mentors, mentees, and valued colleagues around the world. The award gives me added motivation to understand how forests worldwide interact with our changing climate and to make this research relevant to efforts to conserve forests and mitigate climate change. I’m inspired to be working on an issue of such great importance to society.”

Anderson-Teixeira leads a research lab focused on the interactions of forests around with world with climate change and heads up the Ecosystems and Climate Program for the Smithsonian-led Forest Global Earth Observatory. This forest-monitoring network makes standardized measurements in all the world's major forest biomes, which Anderson-Teixeira uses to understand how forests change with time.

Together with collaborators around the world, Anderson-Teixeira researches how environmental change affects forests worldwide and how changes to forest ecosystems either mitigate or exacerbate climate change. Some of the most important discoveries include finding that larger trees suffer most during drought in forests worldwide and that climate change alters forest recovery following disturbances, such as fires—resulting in catastrophic forest loss in some regions.

The Wheaton College alumna also led the creation of ForC, a large public forest carbon database, which she uses to understand global-scale patterns in forest carbon and to help quantify the potential for climate mitigation through forest conservation and restoration.