Assistant Professor Dr. Esau McCaulley is using his significant national platform, including a podcast, book release, and opinion column in The New York Times, to speak into American Christianity and culture with a fresh voice. 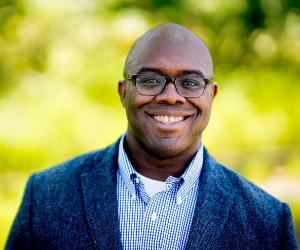 When asked to describe his past year, Esau McCaulley let out a sigh and laughed. “It’s more of a tsunami than a plan,” said the assistant professor of New Testament. “I never set out to be someone who has all these things happening at the same time, but I’ve tried to be faithful to these opportunities as God provided them and be a good steward of them.”

Each of the exciting initiatives that McCaulley is juggling—in addition to teaching undergraduate classes,  caring for his four children while his wife has been deployed in the Navy, and his regular scholarship—presents an unexpected opportunity to speak into the salient conversations of American culture. The confluence of a successful podcast, monthly opinion column in The New York Times, and release of a new book, Reading While Black (IVP), is the natural outpouring of a life spent in pursuit of faithful service to God in the church and the academy and in preparation “for such a time as this.”

“I have a much more global perspective on Christianity that I bring to the classroom and to my scholarship because I’ve lived in a bunch of different places and that’s given me a helpful perspective. I feel like in some ways, each place I’ve visited or lived, God taught me something that’s now useful in my current life and ministry.” Whether it was experiencing injustice growing up in the South or navigating the complexities of upper-class universities, examining cultural divides in America or exploring military life in Japan: McCaulley has had to make sense of all these experiences as a Christian.

When the global pandemic began, followed shortly thereafter by protests against injustice across the country and increased unrest, McCaulley took to writing about his experiences and the Christian response to what he was seeing. “I started writing about them as the only thing that I could do because I felt helpless, and the next thing you know, I have a column,” he said with an incredulous laugh. “It wasn’t planned any more than the pandemic was planned.”

McCaulley’s voice is unique, and compelling. Solidly rooted in his experience in the Black Christian tradition, he also draws on an unexpected mix of areas of expertise which includes Pauline Exegesis and Theology, African American Biblical Interpretation, and Second Temple Jewish and early Christian Messianism. The result is a clarion call for the broader church to a fresh theological engagement with Scripture, one in which Christians of diverse backgrounds acknowledge their own social location as well as the cultures of others. Tackling big questions such as “what is God’s answer to black suffering (and the wider human suffering and the rage that comes alongside it),” McCaulley moves from the specific to the universal, speaking into the challenges of his own community while also addressing the wider concerns of the human community from a thoroughly Christocentric perspective. The result: people are listening. And they want more.

One of the first opinion columns he wrote for The New York Times, published early in the pandemic, explored why the Christian response to the coronavirus meant staying at home. “What I try to do as best I can is pay attention, to reflect upon life as I experience it and see if anything that I experienced has relevancy to people beyond myself,” said McCaulley. Processing what he saw in the world around him was fodder for additional opinion pieces, which quickly led to the well-known publication asking him to contribute monthly.

His Wheaton College students also provide inspiration and perspective for his articles. “My interactions with my students influence the things that I write because they give me a window into their experiences and what’s going on for them,” said McCaulley, who taught for three years at Northeastern Seminary in Rochester, New York, before joining Wheaton’s faculty in 2019. “It’s a manifestation of my concern with the actual lived experiences of people.”

It’s Wheaton alumni that drew McCaulley to the institution initially, in addition to Wheaton’s legacy of biblical studies scholars. As he traveled the world and met Wheaton alumni, McCaulley said it was their understanding of the relationship between orthodoxy and orthopraxy really stuck with him.

Raised in the African American Christian tradition in the South during the aftermath of Jim Crow, McCaulley says this grounding in faith has shaped not only his experiences, but also the lens through which he views the world.

Although this church background was so foundational for him and so many others he knew, he felt that there was still more to be said about the Black church’s bible reading practices. He set out to write a book that filled that gap, providing people with something that he didn’t have while in seminary. “I wanted to make an argument that the African American practice of Bible reading has been a source of hope to African Americans for generations past and can be for generations to come,” said McCaulley. “Reading While Black is an argument for the ongoing role of Scripture in the pursuit of justice in African American Christian communities.”

McCaulley’s concern for sharing peoples’ lived experiences is also a foundational aspect of his podcast, The Disrupters. Much like his New York Times column, he did not seek out involvement with his new podcast, which is co-sponsored by InterVarsity Press. Instead he was invited into the role of host, through which he interviews people who fulfill his definition of a disrupter. “A disrupter as I understand it is someone who sees something true about who God is and what the Scriptures say that people should be, and they see that the church isn’t doing those things. Rather than giving up on the church, it’s calling the church to be better. They’re disruptive because they stay—not because they go,” explained McCaulley.

One episode that was particularly popular featured McCaulley’s friend, Justin Giboney, who directs the “AND Campaign.” The movement aims to educate Christians for civic and cultural engagement by emphasizing that being a Christian isn’t necessarily tied to one political party versus another. Rather, the episode talked about “the distinctiveness of the Christian witness for the watching world during a contested political season,” explained McCaulley. Season two also features a series of disruptive conversations with other voices such as Lecrae, Taylor Schumann, David Swanson, Beth Moore, Chandra Cane, Lisa Fields, and Robert Chao Romero.

In 2020, McCaulley was awarded the Emerging Public Intellectual Award, which recognizes those working in the Christian academy who excel in both academic and public spheres and whose work impacts the common good. And in 2021 Reading While Black was honored with the Christianity Today Beautiful Orthodoxy Book of the Year award. Yet he continues to humbly acknowledge God’s role in all that has transpired. “All of this stuff that has happened in the past year has been God’s providence,” said McCaulley. “I didn’t set out to do anything but be a Christian. I want to be a decent Christian, a decent husband, and a decent father—those are my three life goals. But I’ve always been someone who just loved the Scripture and loved reading and talking about it.”

As one of the most difficult school years in memory draws to a close, once his column has been written, his podcast recorded, the final grade for his classes is turned in, and dinner has been made for his children, McCaulley said he’s ready for a long nap. “God is faithful, and when you feel like you can’t do any more or go any further, I feel a sense in which God has been taking care of me and carrying me along.”

“There’s this verse in Ephesians,” said McCaulley. “Paul said, ‘Glory to God, who could do infinitely more than we can ask or imagine.’ These opportunities are beyond anything that I could ask or imagine.”