After completing a degree from the Wheaton College Graduate School, Bolortuya Damdinjav headed up a research project for the Mongolian Evangelical Alliance that uncovered areas of growth for the country’s churches. 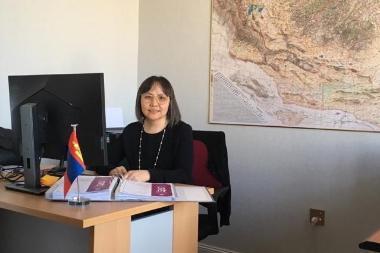 172. That’s the number of counties in Mongolia without a church. But until Bolortuya Damdinjav M.A. ’16 conducted research this past year, no one knew it.

Concrete numbers related to the lack of churches in rural Mongolia was only part of the research Damdinjav uncovered during her work as lead researcher on the Mongolian Evangelical Alliance’s (MEA) 43-page “Mongolian Church Research Report,” which was released in September 2020.

Damdinjav, who is from Mongolia, completed a master’s degree from the Wheaton College Graduate School in 2016. Although she came to the College hoping to learn more about missions, she also gained a lot more—including a primer in research.

In one of her courses on research, she was tasked with writing a research proposal. Hers was about the challenges of church planters who live in rural Mongolia; in the proposal, she also listed out qualitative questions she imagined asking a group of church planters.

“It was something I was very curious about,” she said—and at the time, the proposal was purely academic.

In summer of 2016, she was encouraged to attend the Lausanne Younger Leaders Gathering held in Indonesia. While there, Damdinjav connected with the head of the Global Research Team from the missions’ organization One Challenge International. It turned out that the organization needed someone fluent in Mongol to analyze some 2012 data they had about Mongolian churches from the MEA. Damdinjav was a perfect fit. During the winter of 2017, she spent several months in Colorado Springs with One Challenge, translating their data and sharpening her own research skills.

Eventually, the MEA heard about Damdinjav’s work—and asked if she would come home to Mongolia and head their research department. They needed someone to take on the research question: How well are Mongolian churches doing in making disciples? This question gave rise to a large survey of both rural and city churches in Mongolia.

Her Wheaton research proposal was put to practical use in Mongolia. “In the Wheaton proposal, I wrote down questions to ask church planters, and I ended up asking church planters from different parts of the country those exact same questions.”

The research took about a year, but it unveiled several growth opportunities for the Mongolian church. In addition to uncovering the need for more churches in rural counties, it also showed a need for more discipleship resources and programs. Damdinjav was also heartened to see the unity in Christ displayed throughout Mongolia. Pastors across denominations were happy to cooperate with Damdinjav in her research.

“I was only able to survey churches and connect with church leaders across different denominations because churches were united under MEA,” she said. “If there wasn’t this unity, I wouldn’t have been able to do this research in such a broad way.”

After Damdinjav published her research and started disseminating the findings via virtual meetings and conferences over the last six months, pastors and church leaders started writing to her saying: “Now we know where the needs are. Now we know where to focus our attention.” Prayer groups also thanked her for giving them specific requests to pray about.

“It’s been such a blessing to do this work,” she said. “I really feel privileged to get to work with these church leaders across the country and hear about their challenges and issues. It is a privilege to hear from them.”