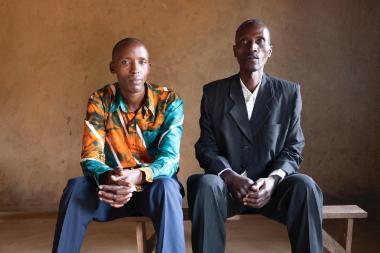 “Everyone knows about the Rwandan genocide,” Park said, referring to the 1994 genocide of about 800,000 people from the Tutsi ethnic minority at the hands of the Hutu ethnic majority.

The 2004 film Hotel Rwanda brought the shocking story to the living rooms around the world, but less has been communicated about the extraordinary reconciliation between Rwanda’s Hutu and Tutsi people.

“Their post-genocide reconstruction rebuilt the country from this tragic history,” Park said. “That must be told, that must be remembered, that must be educated, that must be promoted not only for their next generation but for all the world. We have to learn something from their reconciliation.”

Kigali, Rwanda-based Christian Action for Reconciliation and Social Assistance (CARSA) started a reconciliation program called “Cows for Peace.” In the program, CARSA brings together the families of a survivor of the genocide with those of an offender for workshops related to forgiveness and trauma healing. The families are then given a cow, which is shared between both the survivor and the offender, but is ultimately owned by the survivor. When a calf is born, it goes to the offender’s family to own.

“Cattle-breeding is a status symbol in the Rwandan society and restores the self-esteem of the beneficiaries,” according to CARSA. “The goal of ‘Cows for Peace’ is to enable all participants to experience a trustful cooperation between former opponents and improve their personal circumstances as well as those of society as a whole.”

Working with CARSA Director Christophe Mbonyingabo, Park traveled to Rwanda in June 2019 to interview 34 Rwandans—both victims and perpetrators—who participated in the “Cows for Peace” program. Park filmed, photographed and interviewed these people about their reconciliations for use in the exhibit.

Park’s art installation opened on October 3 at the Walford Gallery of Wheaton College’s Adams Hall. When visitors enter the gallery, they are greeted by digital portraits of Tutsi and Hutu Rwandans from four TV screens. Benches set out in front of the monitors put viewers eye-to-eye with the Rwandans, giving them an almost interactive experience with both survivors and offenders. But only after “meeting” them through the screen will visitors learn the stories of their reconciliation in the next gallery room, where the photographs of both are framed side- by-side with their story of forgiveness accompanying them.

Initially, Park was going to create a documentary film, but he changed his mind while he was with the translator and unit producer, Grace Karekezi, who accompanied him in his meetings with the families of the Hutu and Tutsi Rwandans this past summer.

The “Blood & Milk” installation is a way to recreate Park’s own experience for the viewer. Rather than identifying them with the labels “victim” or “perpetrator,” Park wanted to create an installation where visitors might experience them as they are now---simply neighbors—forgiven and reconciled.

After the installation leaves Wheaton College on November 1, “Blood & Milk” will move to Rwanda as a permanent exhibition in the Rwanda Peace and Reconciliation Center, which is currently under construction.

The Art Department will host a reception and lecture at 4 p.m. on Thursday, October 10. Both the exhibit and lecture are free and open to the public and held in Adams Hall, located at 420 E. Franklin Street in Wheaton. For more information, visit wheaton.edu/events.--Emily Bratcher