This past summer, Wheaton College alumnus Brian Connelly ’19 started a job as a digital marketing coordinator at Elektra Music Group in New York City. He credits the Center for Vocation and Career’s summer internship scholarship with jumpstarting his career. 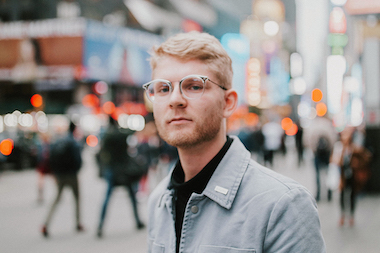 Wheaton College graduate Brian Connelly ’19 is a few months into his dream job as a digital marketing coordinator at Elektra Music Group in New York City. Looking back, Connelly said that the Center for Vocation and Career’s  summer internship scholarship helped him on his way.

“Internships are such an important part of a student’s development as a young professional, but they are often unpaid or underpaid,” said Wheaton’s CVC Director Dee Pierce. “Our scholarship helps ensure that all Wheaton College students who want an internship can afford to have one.”

In 2017, Connelly, a sophomore, was eyeing an internship at Reach Records, an indie label co-founded by Grammy-Winning hip-hop artist Lecrae, that represents artists, such as Andy Mineo and WHATUPRG, who both performed on Wheaton’s campus this past spring.”

“I was very aware of Lecrae and what he was doing in Atlanta--how he was acting as a leader in the thriving hip-hop community and investing his resources back into the city,” Connelly said. “When I heard about the internship at Reach Records, I thought it would be a cool place to work, especially given my passion for music and hip-hop.”

Still, the music industry is notoriously hard to break into, according to Connelly. It’s also infamous for paying interns poorly or not at all. For Connelly, a student who worked summers to pay for tuition the next academic year, an internship in the music industry seemed unrealistic.

But when the CVC announced its then-new summer internship scholarship, a scholarship that supplements unpaid or underpaid internships, Connelly says that he realized: “Hey, there might be a way that I can do this.”

Connelly ended up getting both the internship and the scholarship. That summer at Reach Records, Connelly worked on graphic design projects, he offered input on different marketing campaigns—and he was even able to pitch and execute his own marketing campaign.

“It was a fun and rewarding work environment, and it made for a very exciting summer,” he said.

The internship also gave Connelly confirmation that marketing in the music industry was the profession he wanted to pursue after graduation, and it also opened up additional opportunities.

A few months after his internship ended, Reach Records got back in touch and asked Connelly to work on retainer as a freelance graphic designer, which he did during both his junior and senior years at Wheaton. By the time summer 2018 rolled around, Reach Records had offered Connelly another internship—this one, paid.

That summer, Connelly worked on a marketing rollout for Lecrae's collaborative mixtape with Grammy-winning producer Zaytoven, who Connelly calls “a legend in the ATL hip-hop community.” He also collaborated with Reach Record’s creative director on designing various single covers, as well as launching a marketing campaign that benefited the nonprofit Young Center for Immigrant Children's Rights.

After Connelly graduated from Wheaton College in May 2019, he started looking at jobs at some of the country’s biggest music labels, including Sony Music, Universal Music Group and Warner Music Group.

A few weeks later, a human resources representative from Warner Music Group reached out to Connelly. Within the span of just one week, Connelly completed a Skype interview and flew to New York City for an interview, ultimately receiving a job offer. Just 10 days after his interview, he had moved across the country to Manhattan and had started his dream job as a digital marketing coordinator for Warner’s Elektra Music Group.

Looking back, Connelly is grateful for the CVC internship scholarship, which really made it feasible for him to start a career in the music industry.

“I was a student who was in a financial situation where I had to earn and save money throughout the summers in order to pay for tuition for the next school year, so I had to somehow save money on top of trying to relocate and live in a new city for three months if I wanted to do an internship,” Connelly said. “The unpaid internship scholarship helped offset a portion of those costs and made it possible.”