After 12 years as a pastor in each London and Hong Kong, Dr. Greg Anderson returned to his alma mater to be the Graduate School Chaplain. 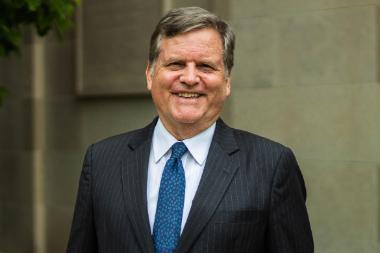 Dr. Greg Anderson has lived, studied, and pastored on three continents since graduating from Wheaton College in 1977. He earned his M.Div. from Princeton Theological Seminary, S.T.M. in Theology from Yale University, and Ph.D. in Communication Studies/ Religious Studies from the University of Minnesota before pastoring churches in Ohio, South Dakota, London and Hong Kong. This semester is his first as Wheaton’s Graduate School Chaplain.

We sat down to learn a little bit more about him and hear more about how his semester is going:

You attended Wheaton College as an undergraduate student, so what led you to Wheaton the first time?

I came to Wheaton because of two older guys in the youth group I grew up with in International Falls, Minnesota, right on the Canadian border. Tom Johnson ’69 and Mark Wold ’69 were two young people from my youth group who went to Wheaton. I admired them for their athletic and academic achievements, but even more for the way they pointed our youth group to Christ. They were heroes and I wanted to follow their lead. One of them played football, and ironically the captain of the football team was David McDowell, the chaplain that I just succeeded.

What led you back to Wheaton to this position as the Graduate School Chaplain?

Last year, after spending 12 years at Union Church of Hong Kong, it became apparent it was time to move. My wife, who enjoys small towns much more than big cities, was ready for a slower pace of life.  After preaching my last sermon in Hong Kong, an elderly Chinese woman came up to me and asked to pray. She thanked God for the way he would use me to train and encourage young people going into ministry. I was puzzled by her prayer then but now I look back and see that she had better insight on my future than did I.

There were ministry positions elsewhere that interested me greatly, but my wife told me I would be very lonely since she would be in Wheaton. She had long hoped that we would end up in Wheaton. Finally, I listened to the Lord, my wife, and the elderly woman and felt a growing sense that God was calling me to focus on encouraging Wheaton students as they prepare for ministry in manifold forms.

What do you enjoy outside of the office?

I tell people that I’m a part-time professor, a part-time chaplain, and a full-time gardener. My wife found a beautiful old Victorian home, which she is fixing up. I’m helping her with some of the unskilled labor. One of the reasons we bought this house is that it has a big English library with a fireplace. I’ve got about 13,000 books, which I enjoy collecting and even occasionally reading.

Speaking of books, what are your favorite three?

My all-time favorite book would be C.S. Lewis’s Mere Christianity. People kid me that the reason I moved to Wheaton is to be closer to the Wade Center, and they’re probably not completely wrong. Anything by Lewis, but particularly Mere Christianity.

My second choice is a book by Robertson Davies, who was a Canadian novelist and playwright. Murther and Walking Spirits is probably my favorite of his books.

I would say that my third favorite is The Reformed Pastor by Richard Baxter.

What are your goals for this first year?

My first goal is to support Chaplain Blackmon. He is an amazing guy, and it’s a real privilege to work with him. My goal is to make sure that the graduate school is part of his vision for a campus-wide Christian formation initiative called “Life with God.”

I’m spending my first few months just getting to know the students and the system, but one of my dreams is to bring in more outside Wheaton chapel speakers to complement the “in-house” speakers from our institution.

Also, I’m seeking to find ways to minister to a growing number of students who aren’t in Wheaton geographically (because they’re enrolled in low-residency programs). I’m working with Academic and Institutional Technology to try and figure out how to do some sort of virtual chapel.

What is one thing you’d like graduate students to know about you?

When I came to Wheaton as a student, I wanted to be a minister. But while I was here, I talked myself out of going into ministry, and I had a bit of a vocational and faith crisis my senior year. I was graduating and not sure what to do next. I had applied to graduate school, but there was this nagging sense that maybe I had a call to the ministry.

I was sitting in the far corner of the old dining room in the upper floor of Wheaton College’s Student Services Building all by myself when Dr. Samuel Schultz, an Old Testament Professor, walked all the way through the dining room and sat next to me, and he said, “Young man, you look troubled. Can I talk to you?” I said, “Well, Dr. Schultz, actually, I’m not sure I know what I’m supposed to do next.” So, he shared his vocational story, at the end of which, he said: “God will reveal the way at the right time.” And I took that as a word from the Lord. That conversation made me apply to seminary.

I hope to be that sort of encouraging presence to graduate students—many of whom are already leaders. I want to help them find just the vocation that God has for them. I want to be there as a chaplain and as a “graybeard,” where I can share from my experience and be there for them.