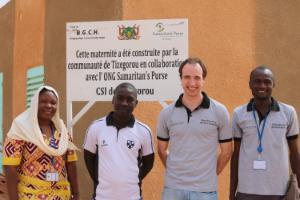 I am a doctoral candidate (MD) at the Medical School for International Health at Ben-Gurion University of the Negev. After graduating from Wheaton, I obtained my Masters of Public Health and worked for Samaritan’s Purse in Bangladesh, the Democratic Republic of Congo and Niger. Most of my time overseas has been spent in Niger, which the United Nations Development Index consistently ranks as one of the two least developed counties in the world. As the Health & Nutrition Program Manager for Samaritan’s Purse’s intervention in Niger, my responsibilities included finding ways to increase access to health care.

The photo seen here is of some of my team members in front of a maternity ward that was constructed in western Niger along the Mali border. This area is subject to chronic food insecurity, alarmingly high malnutrition rates (a Samaritan’s Purse survey found that 26% of children under the age of two were acutely malnourished), terrorism and banditry (the maternity ward is not far from an attack that killed four American soldiers in October 2017). The country’s health infrastructure is particularly weak. Before the maternity ward was constructed, one health center delivery bed was allocated for all deliveries for a population of 11,000 adults. As a result, health center staff were delivering babies on plastic tarps outside, and many women were opting to deliver at home or with a witchdoctor.

To sustainably address this problem, Samaritan’s Purse staff held meetings with village leaders. After explaining the importance of having a maternity ward, my team negotiated that if the local men provided bricks and manual labor, Samaritan’s Purse would supply all construction and medical equipment necessary to build a functional maternity ward. Construction was completed within a few weeks, and the Ministry of Health has employed a midwife to work at the site.

My Wheaton education has been the foundation of my academic and professional careers. I continue to rely on the analytical skills gained in the Biology 252 class while conducting epidemiological work and evaluating humanitarian interventions. The intentionality of Wheaton’s biology professors to mentor students was a great example for me to follow while developing the professional capacity of my national staff. Further, my Wheaton education taught me to be simultaneously open-minded yet critical. This skill has been extremely important while navigating different cultures and the challenges of promoting public health overseas.