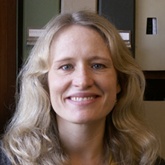 Erica Field's office at Harvard is big and sparse, save for a desk, some shelves, and a few personal artifacts. It's a space she will undoubtedly fill over time with the assorted collections of her budding life in academia. Today, she's getting used to her surroundings and settling into a new job as Assistant Professor in the Department of Economics. Field, who is also a Faculty Associate at the Institute of Quantitative Social Science, calls herself an "applied micro-economist with broad interests in health and development." Her research has taken her all over the world, including some of the poorest regions of Latin America, where she has focused deeply on the local realities of economic development. At the Institute, she plans to engage in research on health policy; a relatively new area for her. What unites her interests is a passion for empirical research methods. Field thrives on data, statistical analysis, and the challenge of teasing social insights from quantifiable measures of human behavior. Like many applied social scientists, Field is interested in exploring a wide range of topics. "These days, I walk around with what I think are a few of the difficult, important, and interesting questions about health behavior and health incentives," she says. "Meanwhile, I'm always on the lookout for empirical strategies that can shed light on these questions by isolating causal influences."

A New Focus on Health
No stranger to Harvard, Field first arrived here in July, 2003, as a post-doctoral fellow with the Robert Wood Johnson Scholars in Health Policy Research Program. She says the fellowship, which was completed at the Institute in December 2004, gave her the chance to explore a range of health issues in both developing countries and the United States. One project in particular addressed the impact of children's education on parents' preventive health behavior. By taking this approach, Field flipped a common research question on its head. Usually, researchers want to know how parents' behaviors influence their children, not the other way around, Field explains. Her specific angle was to ask if parents are more likely to quit smoking if their children go to college. To find an answer, she drew on data from 8,000 US households surveyed annually between 1968 and 1990 as part of the Panel Study of Income Dynamics (PSID). To isolate the causal effect of higher education, Field followed past researchers in making use of the dramatic expansion in the supply of post-secondary institutions across US counties during the second half of the century as a "natural experiment". Preliminary results from Field's analysis suggest that college attendance among children does, in fact, contribute to parental smoking cessation. She will present these findings to the Robert Wood Johnson Foundation in April. As a Faculty Associate, Field plans to continue research on health. A recently initiated project will address how the expectations or beliefs that patients have about a given drug affect their actual response to treatment. She concedes the question won't be easy to address. "It's hard to detect the influence of beliefs about efficacy on consumers' responses to medication since it's generally true that people who take a particular drug are precisely those who believe the drug will work," she says. For that reason, she explains, it's difficult to identify control populations who have low expectations for the drugs. "Why would they buy the medicine [in the first place]?" These issues are hardly insurmountable, however. Institute scientists spend their careers teasing informative conclusions out of imperfect datasets. Field calls the Institute a "wonderful place to brainstorm," where input on a given question can come from anywhere on campus. As partners in the project, she counts Dan Carpenter, Professor of Government; Nicholas Christakis, Professor of Medical Sociology; Ted Kaptchuck, Assistant Professor of Medicine; and Institute Director, Gary King. Together, she says, the researchers will tackle the question on two fronts: On one, they will hone in on the "placebo effect," whereby optimistic expectations produce improvements that aren't directly linked to a drug's pharmacological properties. On the other, they will try to discern if expectations about treatment produce physiological changes that enhance the body's positive response to a drug. "The idea behind the collaboration is to bring together people with similar interests in an effort to engineer the best methodological approach to a set of questions," Field says. "As long as it's a social science question that we all agree is interesting, we can combine methods and data to figure out how best to answer it. That's the idea behind the Institute in general."

A Background in Economic Development
Field says her move towards health research stemmed initially from her work in economic development. "In the developing world, the health burden of poverty is enormous" she explains. "An integrated micro-economic approach to development must explicitly incorporate health and well-being, so I felt that acquiring a broader background in health would help my research a great deal." Field's interest in economic development has a long history. She effectively majored in the subject as an undergraduate at Vassar College, where she obtained a joint degree in Economics and Latin American Studies in 1996. She then continued her research with a Fulbright scholarship that took her to Peru for two years. During that time, Field studied how the government's structural adjustment and privatization programs were affecting the domestic labor force. Field says the experience in Peru helped cement her dedication to quantitative research. "An undeniably important component of good research in development economics is going into the field and trying to understand what's happening with respect to a particular policy question, she says. "Still, the majority of the time, you're sitting in front of your computer working with data," she adds with a smile. "This is the kind of work I do now and as a research assistant it's what I did all of the time. So, I think it's exactly the kind of thing you should do before graduate school in economics. It's important to find out if this excites you." One key insight revealed to her in Peru, Field says, is that much of economic development is essentially a local affair. Cultural and ethnic factors have a major influence on development policy. And without an appreciation for these factors, she emphasizes, economists can't draw accurate conclusions from their research. "Even if you're more interested in commonalities or generalizable conclusions, it's critical to have enough understanding of the data and setting to be able to separate out idiosyncrasies and cultural influences." In 1998, Field returned to the United States for graduate school at Princeton University. But Latin America wasn't far from her mind: Her PhD thesis explored an issue of growing concern throughout the southern continent: The enormous squatter settlements emerging around cities as a consequence of rapid urbanization. In Peru, policy makers had taken steps to address the problem with a nation-wide urban land-titling program that sought to legally recognize squatters' claims to property. Field's dissertation explored whether property titles might also increase credit access and employment among the urban poor. She found that they did-to an extent. With respect to credit, public banks appeared to be more likely to offer loans for construction materials to those holding property titles while private banks were more likely to offer lower interest rates. However, the greatest impact of the program operated through labor markets. "The most important thing we found is that people seemed to be freed from the role of community policing, which influenced their allocation of time across work, leisure and community service," she adds. "Presumably households felt more secure as part of the formal sector because the government suddenly had a responsibility to provide them with legal property protection. As a result, more workers entered the labor force and existing workers worked a greater number of hours." Field now plans to integrate her work in health and development. Her newest project will investigate a growing trend in development policy that involves the distribution of information technology (IT) resources to poor areas. IT makes information cheap, which should promote its flow throughout the developing world, Field says. However, researchers have found that information doesn't always flow as rapidly as technology provides, and in poor areas in particular there are frequently cultural, psycho-social barriers to information transmission. "In many cases, information is only salient when delivered at the right moment, through the right set of channels," she says. In her research, Field plans to investigate how to best facilitate the spread of health information delivered through modern channels. "According to the World Health Organization, 40% of health is exchanging information," says Field. "We'd like to experiment with different approaches to IT-based health promotion to see how information is most readily transmitted to influence and improve people's health behavior," she says. Field says she expects to rely on the Institute's resources-and particularly interactions with faculty associates-as she refines research questions and empirical strategies. "Too much of what we do as researchers happens alone in our offices," she says. "That's why the Institute is ideal: faculty associates are experts in a range of areas, but all have a common interest in social science problem-solving. And any time you can get more feedback from such experienced people, if you can brainstorm with them, the work is more exciting, it's more fun, and it's more motivating."