February 22, 2012 - Lecture by Pierre Desrochers titled, “In Praise of the 10,000-Mile Diet: How the Globalized Food Supply Chain Benefits our Economy and Environment” 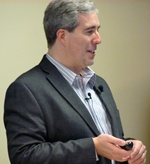 He has co-authored a book with Hiroko Shimizu, The Locavore’s Dilemma which is described as a feisty, scrupulously-researched deconstruction of the “eat local” ethos-and how it distracts us from solving serious global food issues. His unique strength as one of the most well-known critics of the locavore movement is his knowledge of a broader set of issues than other critics who have attacked only one facet of this movement.