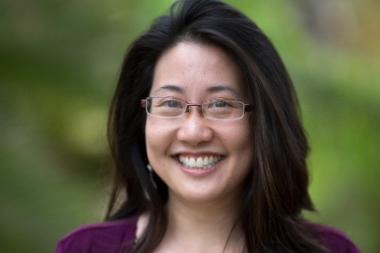 Award-winning poet Dr. Karen An-Hwei Lee credits an elementary school teacher with inspiring her first lines of poetry. Lee was about seven-years-old, and the prompt was to write a poem about a jelly bean. Although she can’t recite the poem from memory, Lee does remember using figurative language to describe the candy’s pungent cinnamon taste and the way its speckled appearance resembled the cobblestone road that ran beside her New England home.

“I was fortunate and blessed with teachers who were very nurturing and also very creative and who look at the whole student, which is also something we do at Wheaton,” Lee said.

Having a string of encouraging teachers in her formative years made its mark on Lee, who came on as Wheaton College’s new Provost this August. Throughout her childhood in New England and later in Hawaii, Lee’s gift as a writer became more and more pronounced. She found herself jotting down poems about everything from insects to weather, with her family and teachers cheering her on.

When it was time for college, she chose Brown University and an English degree with the hope of eventually becoming a writing and literature professor who would inspire and encourage her own students—and continuing to write on the side. After obtaining several more degrees—an M.F.A. in Creative Writing from Brown and both an M.A. in Poetry and a Ph.D. in English from the University of California-Berkeley—she landed her first faculty position at Vanguard University in Greater Los Angeles.

An Administrator with a Faculty Heart

“I consider myself as having a very strong faculty heart,” Lee said. “But during those years as a writing and literature professor at that small Christian college in Southern California, more administrative responsibilities started gravitating toward me.”

Her penchant for listening to concerns and gathering stakeholders to hash out issues and solve problems—all the while making her concern for people evident—lent her a trustworthy reputation at the university. Eventually, Lee found herself engaged in accreditation and assessment processes in addition to teaching.

When a position in accreditation at Point Loma Nazarene University in San Diego came open, she applied. “I didn’t set out to be an administrator,” she said. “Accreditation is about educational quality assurance. It can seem like a whole bunch of rules, but I enjoyed being able to translate and harmonize it, to make it meaningful for faculty to be able to use to enhance student learning.

Lee spent several years at Point Loma before coming to Wheaton this summer, where she is looking forward to using her faculty heart even as she manages the College’s academic affairs.

Keeping up a Writing Life

Between all of these years attending, teaching, and working as an administrator at various schools, Lee has managed to publish several books of poetry including In Medias Res (Sarabande, 2004), Ardor (Tupelo, 2008), Phyla of Joy (Tupelo, 2012), and What the Sea Earns for a Living (Quaci, 2014). She’s also the author of two works of fiction, including The Maze of Transparencies (Ellipsis Press, 2019), and a book of literary criticism. She also translated Double Radiance: Poetry & Prose of Li Qingzhao (Singing Bone Press, 2018) from Song Dynasty Chinese.

Even this summer, as Lee moved from the West Coast to the Midwest and onboarded at the College amid a tornado and the COVID-19 pandemic, she’s written four poems.

Discipline, she said, is the key.

“I encourage my students to remember that time is a resource and a gift from God. I went through seasons where I had a lot of time to write and seasons where I didn’t, but the discipline of writing has endured.”

But for Lee, that discipline also has to be coupled with grace. “Writers should be their own toughest critics and own toughest readers, but they also have to be forgiving of themselves. They have to know when to be tough and when to be tender with themselves,” Lee said.

Another trick she’s learned through the years is a system for storing up inspiration.

“Sometimes, you don’t have the most conducive moments of inspiration,” she said. “There was a season when I was getting struck by inspiration during faculty senate meetings, these really long meetings where people are discussing sobering matters. All of a sudden, I’d be hit by inspiration—the proverbial muse would show up.”

Instead of running out of the meeting to write, Lee would scribble down her thought on a scrap of paper and bring it home to a collection of ideas she’d taken to safekeeping in old chocolate boxes. During Christmas break or Easter recess, when she had a little more time, she’d open the box, review her inspiration, and start writing.

Faith as a Way Forward

As she comes to Wheaton in these uncertain pandemic times, Lee is fortified by her strong faith heritage.

She comes from four generations of Presbyterians and strong women of the faith: Her great grandmother was the first woman elder at a Presbyterian church in Taiwan. In California, an African American family who attended a Pentecostal church brought Lee into their spiritual family.

“Through their theology, I was introduced to the person of the Holy Spirit,” she said. “The Holy Spirit, who dwells in believers, divinely empowers and encourages us. As a form of creative expression, poetry is an outlet for pouring our hearts out to God, and there we find wisdom and solace, individually and as a community, even seasons of challenges like this one.”—Emily Bratcher