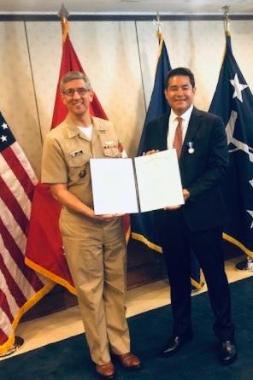 Iglesias, a retired U.S. Navy captain, was recognized with the Superior Civilian Service award for the way his "extensive experience and outstanding leadership lent indispensable gravitas to a highly complex review of the Department of the Navy’s two distinct legal communities," according to the award citation.

For five months, between August and December 2019, Iglesias reviewed current military and civilian practices for manning, training, and resourcing the Navy Judge Advocate General’s Corps and the Marine Corps Staff Judge Advocate communities. He offered best practices for optimizing the advocate communities’ culture and overall effectiveness. His work will have "wide-reaching impact" to the entire Department of the Navy legal community, according to the award citation, which goes on to say "Captain Iglesias’ dedicated support and exemplary performance reflected great credit upon himself and upheld the highest traditions of the Department of the Navy."

"I appreciate the official acknowledgment from the Chief of Naval Operations,” Iglesias said. “I was deeply honored to be part of a panel of experts who studied serious legal problems and made some practical recommendations to avoid future problems."

Iglesias has been on the Wheaton faculty since 2014 as the Jean and E. Floyd Kvamme Associate Professor of Politics and Law. He is also the inaugural Director of the Wheaton Center for Faith, Politics and Economics. Previously, he served in the U.S. Navy as a senior JAG officer in support of Operation Enduring Freedom where he prosecuted war crimes. Prior to that, he was the U.S. Attorney for New Mexico—a position he was appointed to by former President George W. Bush. He served from 1984 to 2014 as an active and reserve duty U.S. Navy JAG Officer.—Emily Bratcher