Elliot Young ’21 is a computer science major with minors in mathematics and art. 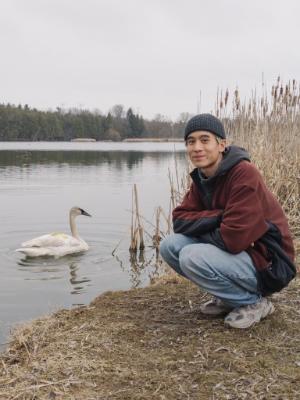 “I am a huge fan of the liberal arts,” Elliot Young ’21 said with a chuckle. During his senior year of high school, four years ago, he applied to all technical schools with the plan of studying engineering, and Wheaton was the only liberal arts school on his list. “After the application season was over, I had this profound moment where I realized I didn’t want to go to an engineering school at all.”

Visiting the campus over his spring break confirmed the decision. “Albeit chilly, Wheaton seemed to be the right fit,” he said. “The student body was comfortable, the campus gorgeous, the diversity of curriculum and class sizes enticed me.”

Young attributes a lot of his growth during his time at Wheaton to the fellowship and encouragement he’s found in the art department, a corner of campus that doesn’t always get the most recognition. Hidden away in Adams Hall—behind bright sage green doors and a brick exterior—are a darkroom for developing film, gallery rooms for student and professor artists to display recent projects, and studios for a panoply of art mediums, including printmaking, woodwork, sculpture, and painting.

“There’s not as much pressure to produce something outstanding,” Young noted, describing the attitude of Wheaton’s art program that he believes sets it apart from many other disciplines. “It’s more about the process of making things with your hands that seems important. That seems to be the focus of the art classes. At least, that’s how I felt as an art minor. I felt like the professors really wanted students to have the opportunity to produce just for the sake of making . . . If not for the art classes, I don’t think I could have made it through some of the tougher computer science courses, just because there was such a relief from staring at a screen and debugging code.” 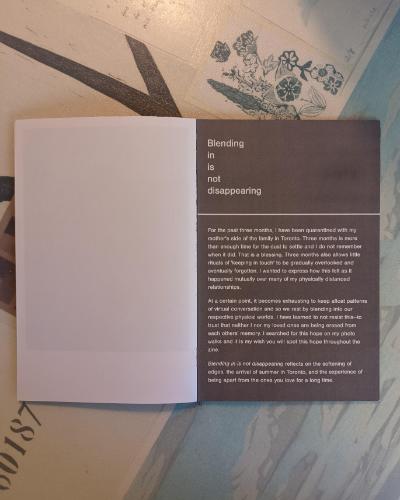 Young often refers to his art professors as being instrumental in how he views art, both of his own creation and in receiving the art of others. “I’m pretty close to my photographer professor, Greg Schreck, and after taking his darkroom class, I learned about how important it was to just make photos not specifically to have them seen, but just for yourself,” he said.

One of Young’s recent personal projects stemmed from the things he learned from Professor Schreck. When Wheaton switched to remote learning for B Quad last spring semester, Young chose to move by himself to Canada rather than going home to live with his family in the Bay Area. He remained in Canada through the summer, and said of the experience, “It was the first time I went on walks and took photos that were not for an assignment and not to post anywhere, but just for myself. I thought it was an important way to process what was happening that summer. There was so much happening, and I wanted to be able to express that somehow . . . I had all these emotions of feeling left behind a little bit — a little bit ‘out there’ — realizing that everyone was so far away.”

He put these photographs together in a zine (or collection) titled “Blending in is not cisappearing” and mailed copies to his close friends. “My artist statement [for the zine] was basically [describing] what it felt like to be away from people you love for a long time,” he said. “Being able to work through those emotions through photography was really healing.” For Young, film photography, more than digital photography, lends itself to slowing down and contemplation. 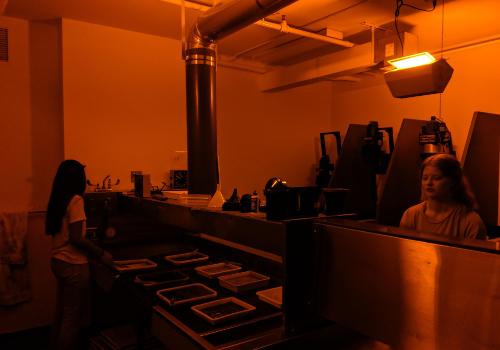 “Every time you click the shutter, you’re expecting to spend like 30-40 minutes with that one frame , eventually down the line,” he explained. “You have to develop the film. Just the process of developing that one photo is so weighty. There’s so much expectation for every single shot. You realize this is a responsibility . . . Also, it’s expensive. So, that much pressure on each photo really slows you down and makes you think about the importance of the frame or why it feels right to take that photo — what it means to you . . . [Film photography] puts a lot more focus on what  time and place will mean to you, or mean to who you want your photos to be seen by.”

Besides his art endeavors, Young has found a strong sense of belonging and understanding through his conversations on campus. “Being surrounded by minds that are, in the same way [as me], driven by curiosity and excitement for different topics, and finding the intersections between all those things—I think that's what makes students at Wheaton such interesting people. I feel like you can talk to anyone at Wheaton, and they’ll love to talk about why they’re taking these courses or how the courses they’re taking fit into a bigger picture for what their ambitions are or what their values are.”

Reflecting back on why he chose Wheaton, Young said, “Most importantly, maybe without knowing the words at the time, I yearned for a firmer, perhaps more critical understanding of what it meant to be, ‘a Christian’ and where God wanted me at the intersections of faith, vocation, and justice. I remember peeking into the art building on a campus tour. Little did I know it would become the safest, most welcoming, and productive place I’d find during my time as a student at Wheaton.”