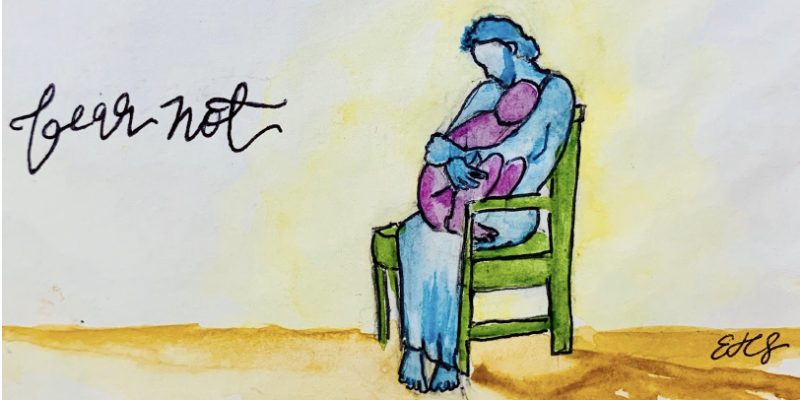 “Fear not,” often the first words uttered by angels, is one of the most well-known messages in Scripture. Worship music is a potent source of encouragement for believers in fear; that’s why Wheaton College Conservatory of Music graduate Addie Gannon’20 just released her album, Fear Not. The album was the fruit of a semester-long independent study in recording techniques taught by Brian Porick, digital recording professor. “I had the idea to produce an entire album after completing the Acoustic Recording Techniques class during the spring of 2019. During the class, I recorded one of the chapel bands playing a worship song. I loved listening to those powerful lyrics for hours on end while editing and knew I wanted to record more worship songs. It made sense to find students with original songs to avoid copyright issues and promote original music.”

From there, Gannon partnered with faculty, staff, and students, many of whom were not studying in the Conservatory of Music. The songs were written by students Sara Beth Thomas ’21, Delaney Young ’20, Jacob Cuevas ’21, and Johnnie Rourke ’21. Of the four, only Sara Beth is a music major, but all are involved in worship for the chapel in some capacity. “I already knew and a couple of them during the planning stage, but others I met for the first time when they came to the studio to record.” Each artist wrote, sang, and performed their original music with either a piano or guitar. Then Gannon would collaborate with other musicians to add additional instruments.

But at the end of the semester, a global pandemic threw a wrench into her plans. Recording music is a challenge with artists scattered around the country. Gannon, with the help and patience of her contributors, began to explore creative solutions. “Much of this album was recorded and produced in the spring of 2020 during my final semester at Wheaton College. The vocals, piano, guitar, violin, and cello were all recorded in the studio in Armerding Center for Music and the Arts.” Yet, there was still a significant amount of work to be done. 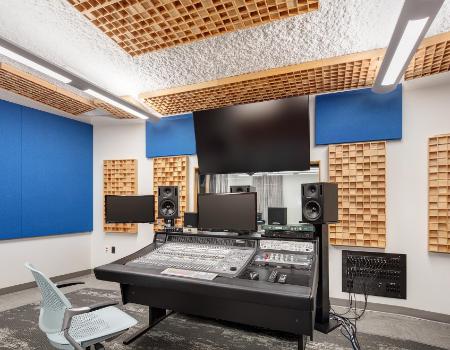 “When students were sent home for the rest of the semester, I thought the project was over, but Brian Porick was able to help me problem solve.” Porick helped Gannon to access the tools she needed to complete the editing from home and used his network of musicians to record the missing instrumental parts. One night after an Acoustic Recording Techniques night class, where Porick’s friend Charlie Dresser was already demonstrating drum miking techniques, they met over Facetime to record the drums for the album. Once they recorded the drums, Porick brought in another friend to record the upright bass portions while Porick worked on the synth sounds. “I’m super happy with how everything came together amid quarantine, especially thinking back to how little we had produced before I left campus in March. With fewer distractions, I was able to pour way more time into the project than I would have been able to at school, so I think the final product is better because I finished it from home,” Gannon explained.\ 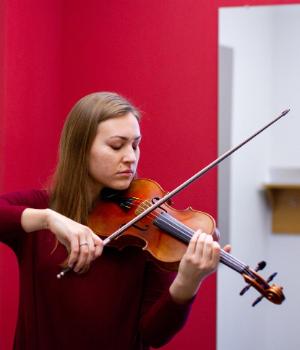 The project, which began in January, grew into much more than a learning experience for Gannon; it became a way to showcase the talents of her peers. With original songs, vocals, and instrumentals, Gannon created something unique for the glory of God. She entitled the album “Fear Not” under the inspiration of one of the songs, “I Will,” based on Isaiah 43:1. “This verse has been comforting to me throughout college, and is representative of my college journey as I’ve learned to “fear not.” The cover art was painted by my roommate, who had the picture of Jesus holding a child come to mind months ago during an All-School Communion, and it fit perfectly with the theme of this project.” Her beautiful collection of songs is now available on Spotify, Apple Music, and Amazon Music. “I am not planning to monetize Fear Not. It is a gift to the artists and all the listeners.”

None could have predicted the events we have seen so far in 2020, but we can rest in the Lord. “I hope that this project is an encouragement to everyone who listens. The lyrics are especially powerful now amid COVID-19 and all the other tensions in our country.” It is incredible to see how God began orchestrating this project a year before it was most needed. Now, listeners can remember God’s faithfulness as they rest in His loving embrace and fear not.

The album is available for free on Spotify, Youtube, Apple Music, and Amazon Music.