Wheaton College Women’s Basketball Alumnae Katie McDaniels (’17) was diagnosed with a rare bone cancer during her senior year. Her Thunder teammates rallied around her then, and the team continues to support her and others facing sarcoma by raising money at a “Sarcoma Awareness Event” this weekend. 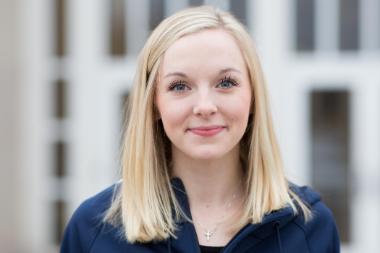 Playing basketball at Wheaton College was a singular experience for Katie McDaniels, who played for the Thunder from 2013-2017, sinking baskets even as she racked up awards like National Rookie of the Year and All-Americans.

But what she treasures most about her Thunder experience are the relationships—with God and her teammates.

“I had the best teammates that I could ever wish for,” she said. “Everybody just genuinely sought the best for everyone else and had that high standard of joy and empathy and encouragement for one another. It wasn’t competitive within the team, which is really special and something I had never experienced before.”

That Wheaton Thunder support was something that McDaniels would come to lean on. It was senior year, and she was experiencing incredible pain radiating from her hip. “At the time, I just had this feeling that my season was going to be over if I said something, so I didn’t,” she said.

After the season wrapped up, she sought the opinions of several orthopedic doctors. The pain turned out to be a stress fracture in her hip bone, which had intensified through all of the layups and other high-impact basketball moves throughout the season. But the fracture also revealed something else—chondrosarcoma, a rare bone cancer, that was eating away at the inside of her hip.

What’s amazing was that the pain while playing basketball was just bad enough to alert McDaniels that something was wrong, but, she said, it was equally astounding that the bone hadn’t shattered in one of her many falls on the court—letting the cancer escape throughout her body. “It was an act of the Lord protecting me,” she said. 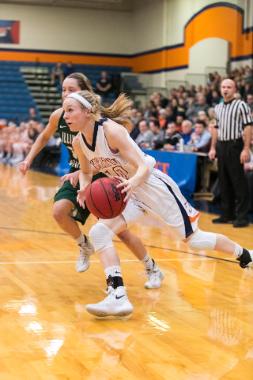 After a surgery and treatment, McDaniels is cancer-free, and it’s something that she daily gives thanks for. Others facing this rare cancer haven’t shared the same story.

“Sarcoma accounts for less than 1 percent of all adult cancer diagnoses,” she said. “It’s really terrifying to receive a diagnosis and know that there’s not much going on [in terms of research and treatment].”

That’s why last year, the Wheaton College Women’s Basketball Team launched the “Sarcoma Awareness Event.” The event raised more than $5,000, and this year they’re hoping to increase that amount—especially as an anonymous donor has volunteered to match any donation up to $10,000.

Spectators can honor McDaniels and support others battling sarcoma by wearing pink and donating money at this Saturday’s 5 p.m. basketball game, held at King Arena. Proceeds will go to the Sarcoma Foundation of America. If they’re unable to make it to the game and would like to support the cause, they can email Ryken's Rowdies. Donations can also be made via Venmo (@rykens-rowdies).

“I feel so humbled and honored and grateful,” McDaniels said. “I hope and I pray that we can make an impact because all of the families that are fighting this still really, really need our help.”—Emily Bratcher