Wheaton College’s Dr. E. Beatrice Batson—a matriarch of the faith and Shakespeare too—went to be with the Lord at the age of 98. 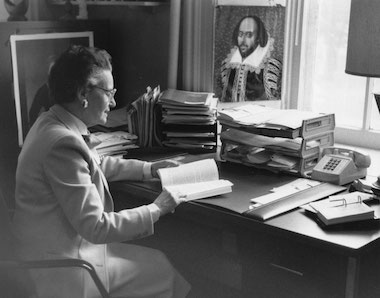 Batson was born in Charlotte, Tennessee—and at the age of 12, she told her father she was going to be a college professor when she grew up. To make good on that vow, Batson completed undergraduate work at Bryan College and earned a master’s degree from Wheaton College. In 1956, she earned a Ph.D. from George Peabody College for Teachers at Vanderbilt University. She completed post-doctoral work at both Northwestern and Oxford universities. In 1957, she joined Wheaton’s English Department faculty, under Chair Dr. Clyde S. Kilby.

In a piece for the August/September 1991 issue of Wheaton magazine, she wrote: “When I came to teach at Wheaton in the autumn of 1957, I discovered a nucleus of professors and students charged with excitement over Wheaton’s mission as a Christian liberal arts college. Combined with this concern was the belief that mind and spirit should be so constantly and consistently nurtured that complacency would be highly unlikely to make permanent inroads. I found the atmosphere extraordinarily exhilarating.”

She spent the next 33 years teaching at Wheaton College—adding to its “extraordinarily exhilarating” atmosphere with her own legendary classes. In 1963 she was presented with the prestigious Senior Teacher of the Year award. “Few of her students will ever forget her passionate readings of King Lear or her rapturous enthusiasm for ‘the journey home’ in Homer’s Odyssey—the voyage that her own noble soul has now taken, in anticipation of the coming resurrection,” said Wheaton College President Dr. Philip Ryken ’88.

In 1973, Batson stepped into the role of Chair of the English Department—a position she held until 1987. Later, she returned as Chair, providing leadership during a time of departmental transition. “Professor Batson was a model department chair, and as one of the few female faculty members at the time of her hire, she wanted everyone—teachers and faculty, male and female—to thrive and flourish,” Diddams said. “Yet she was particularly interested in helping young women succeed.”

In 2007, Batson was named Alumna of the Year, not only for her outstanding teaching career but also for her work in spearheading the Shakespeare Collection and Institute at Wheaton College, a collection of the best Christian scholarship on Shakespeare’s works. She also co-founded VII, the Marion E. Wade Center’s annual journal aimed at promoting awareness of its seven authors and encouraging critical assessment of their work. She wrote several books over the course of her life, including A Reader’s Guide to Religious Literature, Word and Rite: The Bible and Ceremony in Selected Shakespearean Works, and Shakespeare’s Christianity: The Protestant and Catholic Poetics of Julius Caesar, Macbeth, and Hamlet.

Batson fervently believed that Christianity and the cultivated mind were inextricably linked—and she inspired students “with her lofty vision for the worship of Christ through the love of learning,” Diddams said. “She touched students at a profoundly deep level and influenced their lives in ways she probably never fully knew.”

In the June 1960 issue of Wheaton magazine, she wrote: “When our academic thinking is geared and committed to God with His truth, we ought to be uncomfortable and dissatisfied with mediocrity in any area. We will go about our work on this campus with the deep persuasion that these minds of ours are gifts from God, not to be denounced or frowned upon, but to be used and trained for His honor.”

She will be honored at a visitation on January 28, and a funeral on January 29 at the Chapel of the Cheatham County Funeral Home in Ashland City, Tennessee. For more information, visit the funeral home’s website. In lieu of flowers, her family in Tennessee is encouraging her friends and former students to support the Batson Shakespeare Collection and Batson Scholarship Fund.