No Vacancy: The Need to Listen Together

This blog features stories about the Wheaton College Graduate School. Kent Annan, Director of the M.A. in Humanitarian & Disaster Leadership, shares a Christmas reflection from his time in Haiti.

Christmas Eve in Haiti about 15 years ago. My wife, Shelly, and I were living there and had gathered on our porch under the palm trees and starry sky with a dozen friends and neighbors. We’d shared a meal of rice and beans and all the fixings. The plates had been cleared away.

Dusk settled, conversation continued, and someone suggested reading the Christmas story. We got our Creole Bible, lit a kerosene lamp, and one of our neighbors, a young man with a strong clear voice, read aloud the narrative of Jesus’ birth from the gospel of Luke. The story was read a couple of times and then Shelly or I (can’t remember who) asked what stood out to people.

We were informally using lectio divina, an ancient approach to reflecting on Scripture that we had adapted and were using as part of a Christian education program with churches and schools in Haiti.

After hearing the story a couple of times, everyone was invited to share their thoughts on what they heard. And everyone did, from young (seven years old) to not-so-young (a couple in their late sixties) to in between.

At least it did to me. When I heard the verse read that night I understood, as I always had, that literally the inn had no rooms left—a full house, a first-century version of a flickering neon “No Vacancy” sign.

One neighbor who is a farmer said, “If Mary and Joseph would have been wearing nice clothes and had lots of money, there would have been a place for them. They would never have made her give birth with the animals.”

“Yes,” someone else said, “they would have treated them differently if they had money.”

The conversation paused, a silence acknowledging the truth of his words.

“But isn’t it amazing,” spoke up another friend, “that our Lord chose to come to this earth through a woman who had no place, who was given no place. And even more amazing, God came to earth with good news to tell us: that we do have a place! He came to tell us, ‘You have a place here as a child of God. And you have a place after this. In fact, right now my Father is preparing another place for you too.’”

There was another pause, but this time it was a silence of peace and of hope.

It’s a holy moment I’ll remember for the rest of my Christmases. It permanently changed how I hear that phrase in Jesus’ birth story. So what happened?

We listened with people who were, in many ways, different from us. Our economic, racial, educational, national, and cultural backgrounds are very different from the friends we were sitting with. Some of these neighbors had no formal education and lived close to the edge of survival. Something happens—or at least can happen—when we listen together.

We listened in another language. Our experience reflected what Frederick Buechner wrote in Wishful Thinking, “If you have even as much as a nodding acquaintance with a foreign language, try reading the Bible in that. Then you stand a chance of hearing what the Bible is actually saying instead of what you assume it must be saying because it is the Bible.”

We listened to Scripture. There are so many differences, but we were brought together by a common story: the story of Jesus.

We listened in a way that ensured everyone present could participate. Some literate and some not. I don’t think anyone there had finished high school, and at least a few were illiterate and probably had never spent a day in school. We were there with friends, thinking about Jesus’ birth, and finding a way to share a meaningful moment together.

We listened to each other. Really listened.

We listened for God. I’m glad we can listen for God together, lean on each other. Maybe I’ll hear something of God, but if not, maybe someone else will hear a whisper and let the rest of us know.

It’s not that you couldn’t get this insight sitting in your church or reading alone at home. But that didn’t happen for me. It happened with these friends on that porch in Haiti.

The night was meaningful, hopeful, and peaceful, but the undercurrents of what is radical and gritty about faith was also right there in the midst of the story and the interpretation. In the shared reading. In the shared lives. In the work for justice that was—and is—ahead.

Excerpted and adapted from a chapter that originally appeared in Global Perspectives on the Bible (Pearson, 2013)

Kent Annan is author of You Welcomed Me and Slow Kingdom Coming. Prior to directing the M.A. Humanitarian & Disaster Leadership, Kent was the co-director of Haiti Partners and a graduate of Princeton Theological Seminary. 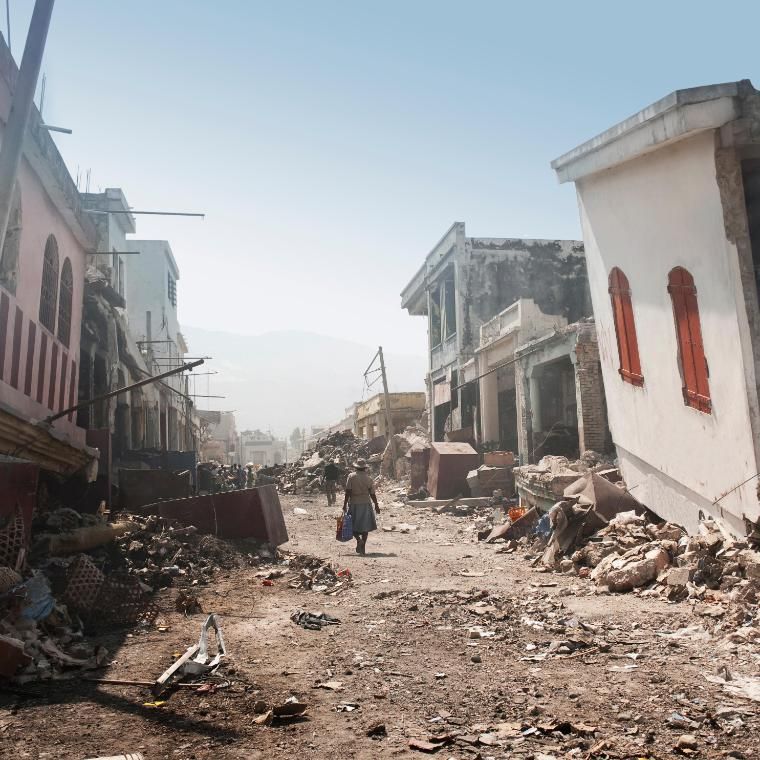 The M.A. in Humanitarian & Disaster Leadership prepares the next generation of humanitarian and disaster professionals to lead with faith and humility, utilize evidence-based practice, and serve the most vulnerable and the Church globally.

Learn More About the M.A. Program
How to Apply

Ready to apply for the M.A. in Humanitarian & Disaster Leadership? Learn more about the admission requirements for the program.